Naan pizza is the perfect individually-portioned pizza option, and my version is completely plant-based! This vegan naan pizza is perfect for loading up with all your favourite pizza toppings.

Chewy, delicious naan is an amazing base for a pizza, but the traditional version is usually made with ghee, so it’s not vegan. (Womp womp.) But once I had my vegan naan (and vegan garlic naan!) recipes down pat, I knew my next mission was to use them to make personal-sized pizzas.

This vegan naan pizza recipe starts with my homemade naan, which swaps the dairy for vegan milk, yogurt or coconut cream, and coconut oil. Then, we go to town on the toppings. Spoon on some pizza sauce, layer on your favourite meltable plant-based mozzarella, then pile on the faux meats, veggies, and perhaps even some pineapple if you’re so inclined.

What’s fabulous about this recipe is that you can make these pizzas and freeze them for easy lunches and dinners, and it’s also simple to double the recipe so you can prep an even bigger batch to keep on hand. There’s no better way to get your vegan naan pizza fix!

Is Naan and Pizza Dough the Same?

They’re very similar, but they’re not the same. Naan has some added fat in it—in a traditional naan recipe, it’s from the dairy, but in my recipe, it’s from plant-based sources. Pizza dough is made only with flour, yeast, salt, water, and possibly some additional seasonings.

For the vegan naan:

For the naan pizzas:

How to Make Vegan Naan Pizza

If you’d like, you can make the naan a day or two in advance, and then you’ll have it ready to go when it’s time to assemble your pizzas.

Add the wet ingredients. Form a well in the centre of the flour. Pour the vegan milk and vegan yogurt into the well, then mix with a spatula until a shaggy dough forms.

Let the dough rise. Lightly oil the ball of dough and place it back into the bowl. Cover the bowl with plastic wrap or a kitchen towel and let the dough rise for 30 minutes on the counter in a warm place, until it’s about doubled in size.

Form the naan. Divide the dough into 6 balls and roll them into circles. Press each circle with your palm, then roll them into a slightly oblong shape with a floured rolling pin, until they’re about 6 to 8 inches in length.

Prepare. Warm a large skillet over medium-high heat and brush both sides of the naan with oil. Add any seasonings, if you’re using them.

Cook the naan. Add a teaspoon of oil to the hot skillet and place a piece of naan into the pan. Cook until bubbles begin to form, about 30 to 60 seconds. Flip and cook for another 30 to 60 seconds, or until there are dark spots.

Finish. Transfer the cooked naan to a wire cooling rack, then repeat with the remaining dough.

To make the vegan naan pizzas:

Prepare. Preheat your oven to 400ºF. Grease a baking sheet or line it with parchment paper or a silicone mat.

Assemble. Spread the sauce onto the naan, leaving a border on the edges. Scatter the vegan cheese over the sauce, followed by the toppings.

Bake. Place the assembled pizzas onto the prepared baking sheet and bake for 5 to 8 minutes, or until the cheese is melted and the toppings are warm.

Here are a few hints and tips for making perfect vegan naan pizzas.

There’s no reason to stick to this recipe as written! The world is your oyster when it comes to these vegan naan pizzas. Here are some ideas:

How to Store and Reheat Leftovers

If you have leftover naan pizza, wrap them and store them in the refrigerator for up to 3 days. I recommend reheating them in a 425ºF oven, but a microwave will work in a pinch.

Can This Recipe Be Frozen?

Yes! Wrap your vegan naan pizzas with plastic wrap and store them in a freezer bag or airtight container. While you can do this either before or after baking them, I recommend doing it before baking (after you’ve added the toppings) for best results. Then, simply bake according to the recipe instructions, tacking on a few extra minutes to account for the fact that the pizzas started out frozen.

Enjoy friends! If you make this vegan naan pizza recipe, please snap a photo and tag #jessicainthekitchen on Instagram! We’d also love it if you would leave a comment below, and give the recipe a rating! Thanks so much! 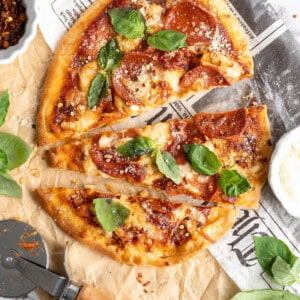 Pizza Ingredients (to be split over the 6 pieces) 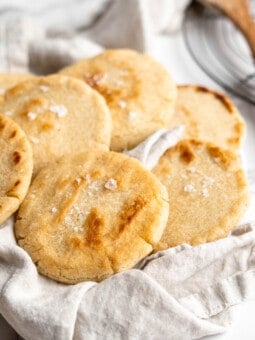 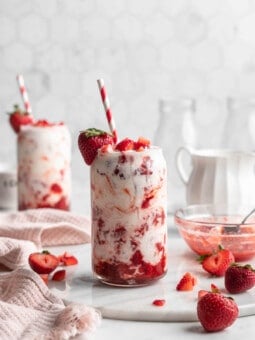 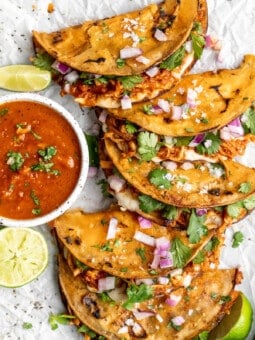 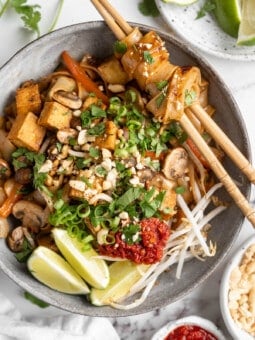 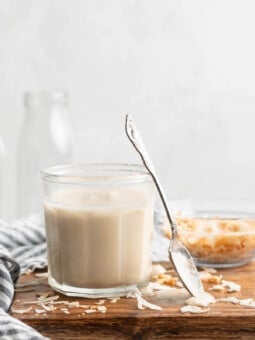 How to Make Coconut Butter 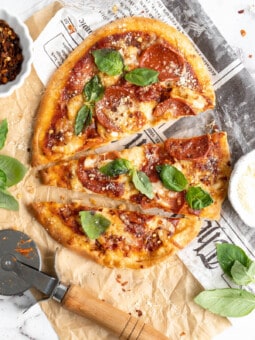