By Jessica Hylton - February 12, 2018 - Updated December 2, 2020
Home » Recipes » Vegan Potato Soup – One Pot & Creamy
364 shares
This Vegan Potato Soup will give you all the comfort! It’s made in one pot, blended to perfection and topped with coconut bacon! 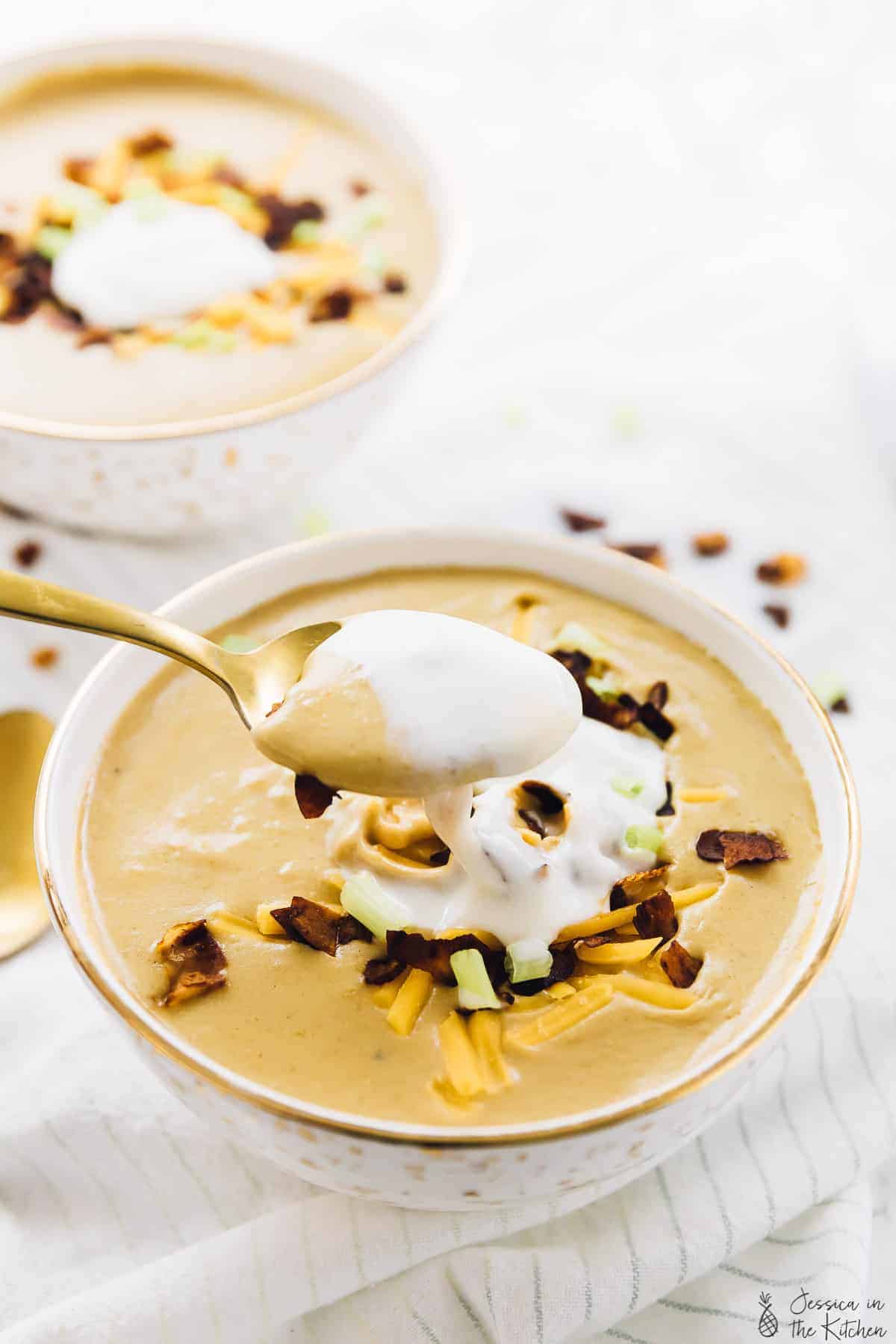 It seems that ever since falling in love with soup in New York, I literally can’t get enough of it. There’s something about that warm, comforting and soul soothing feeling that wraps all around you. While in New York, it was kind of a necessity to combat the cold. When I’m in other warmer places though, it’s about something else. Knowing that in one bowl, I am nourishing my body, mind and soul all at once! Wow, I should write a soup memoir. 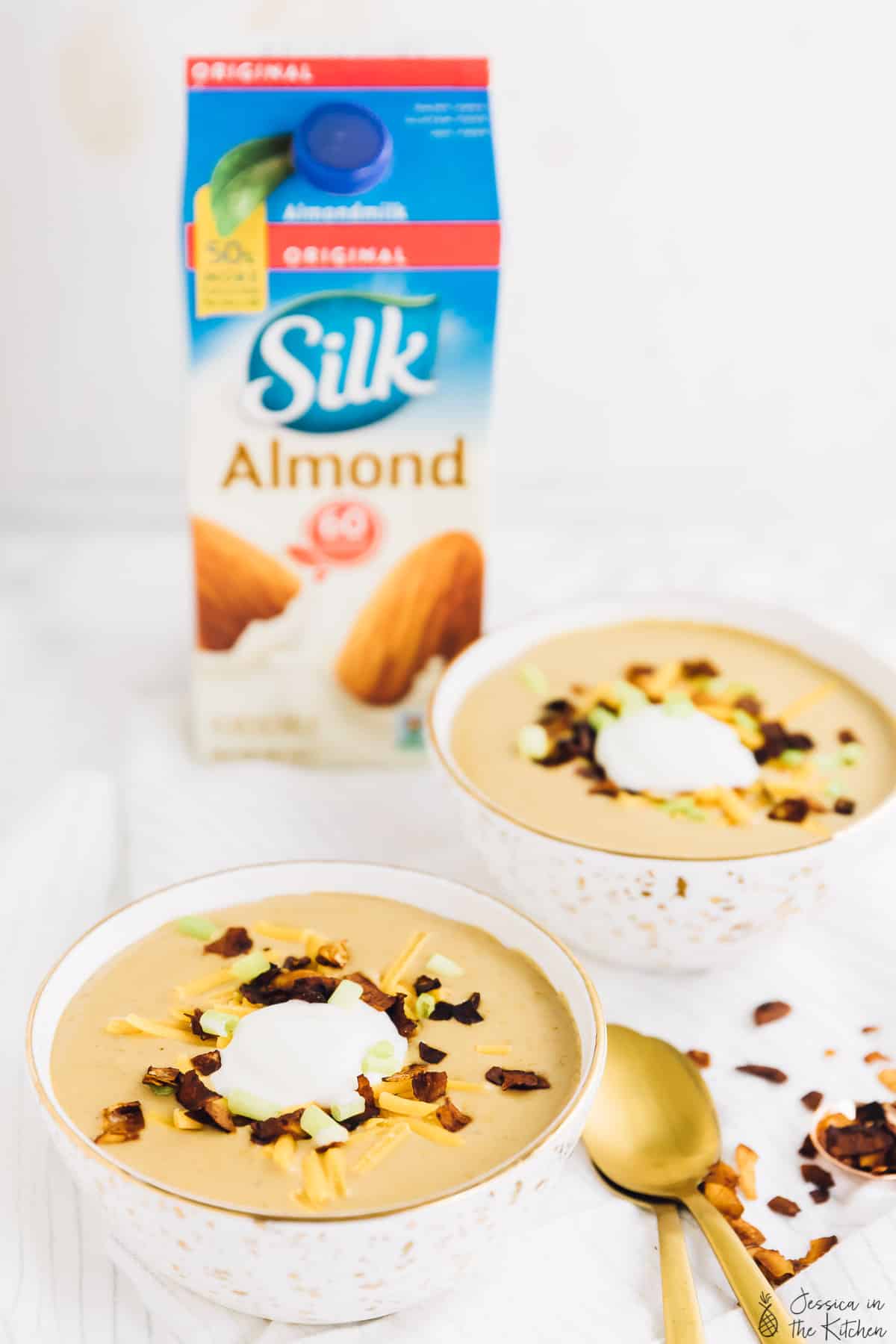 I realised that I almost only do thinner soups/mainly broth based soups, and soups are my largest request from you guys. So, why not expand it to more thicker soups? When I was younger, a tomato bisque was my favourite soup. Everywhere we went, I piped up immediately to order the tomato bisque.
I don’t remember the last time I enjoyed a soup so nice and thick, and with us still in the cold months, I opted for a vegan Potato Soup. Cold night? Check. Rainy night? Check. Hearty and delightful? Check check check. Sometimes, I want that indulgent feeling on a regular weeknight, without overdoing it. If you’re like me, then I promise, this soup is for you! 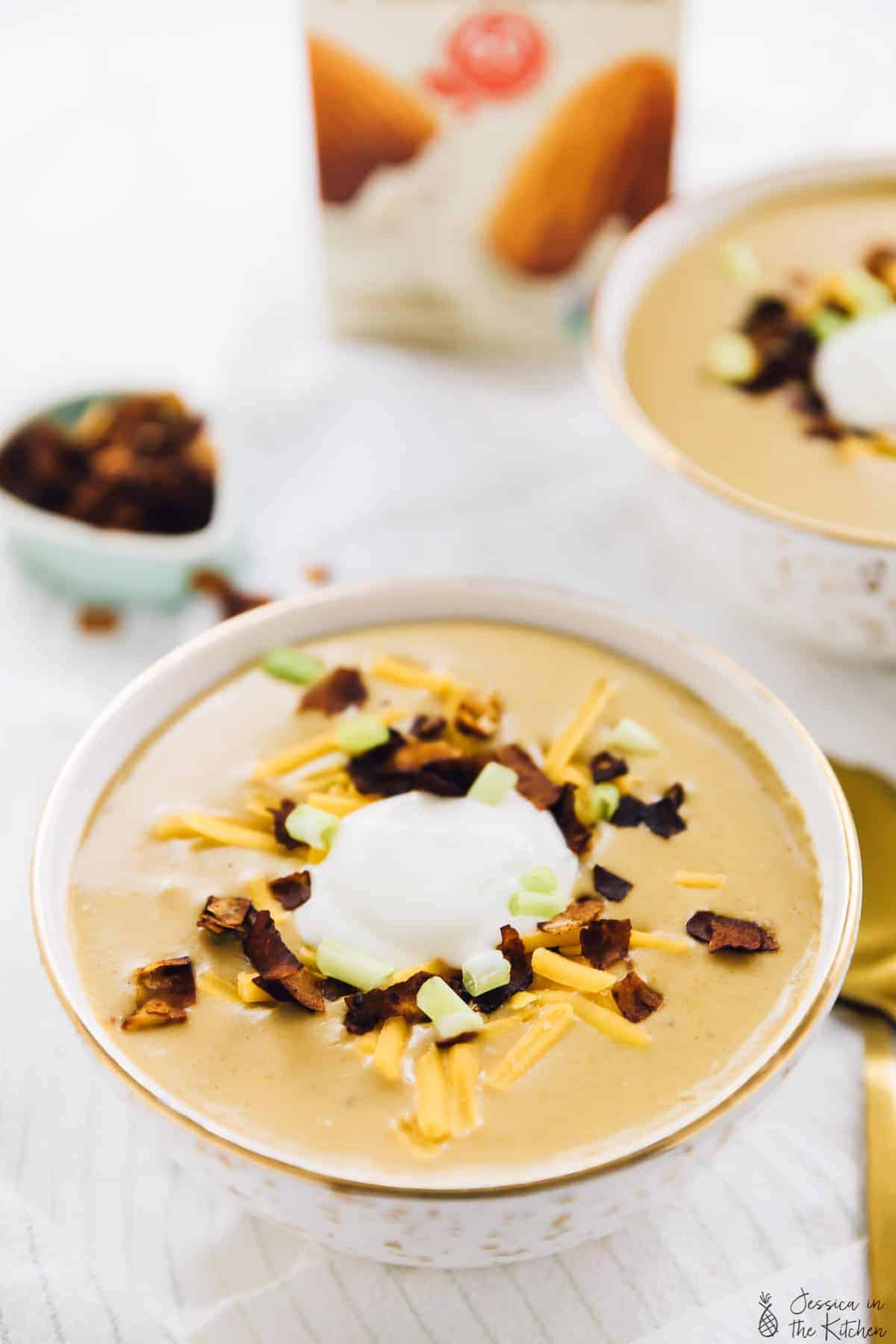 So firstly, the traditional version of this soup is typically pretty unhealthy. I mean, guys. I knew I couldn’t share the traditional recipe, so I went through, did my JITK thing, and switched it all up. What I have today is a soup made from potatoes, veggie broth, Silk Almondmilk, vegan butter, and a little bit of flour. It hits the spot that you want. Although it tastes quite indulgent, it’s actually made with a whole lot less calories than the typical loaded potato soup. Why? It’s literally all in the almond milk.
I used my Silk Almondmilk here because it’s: 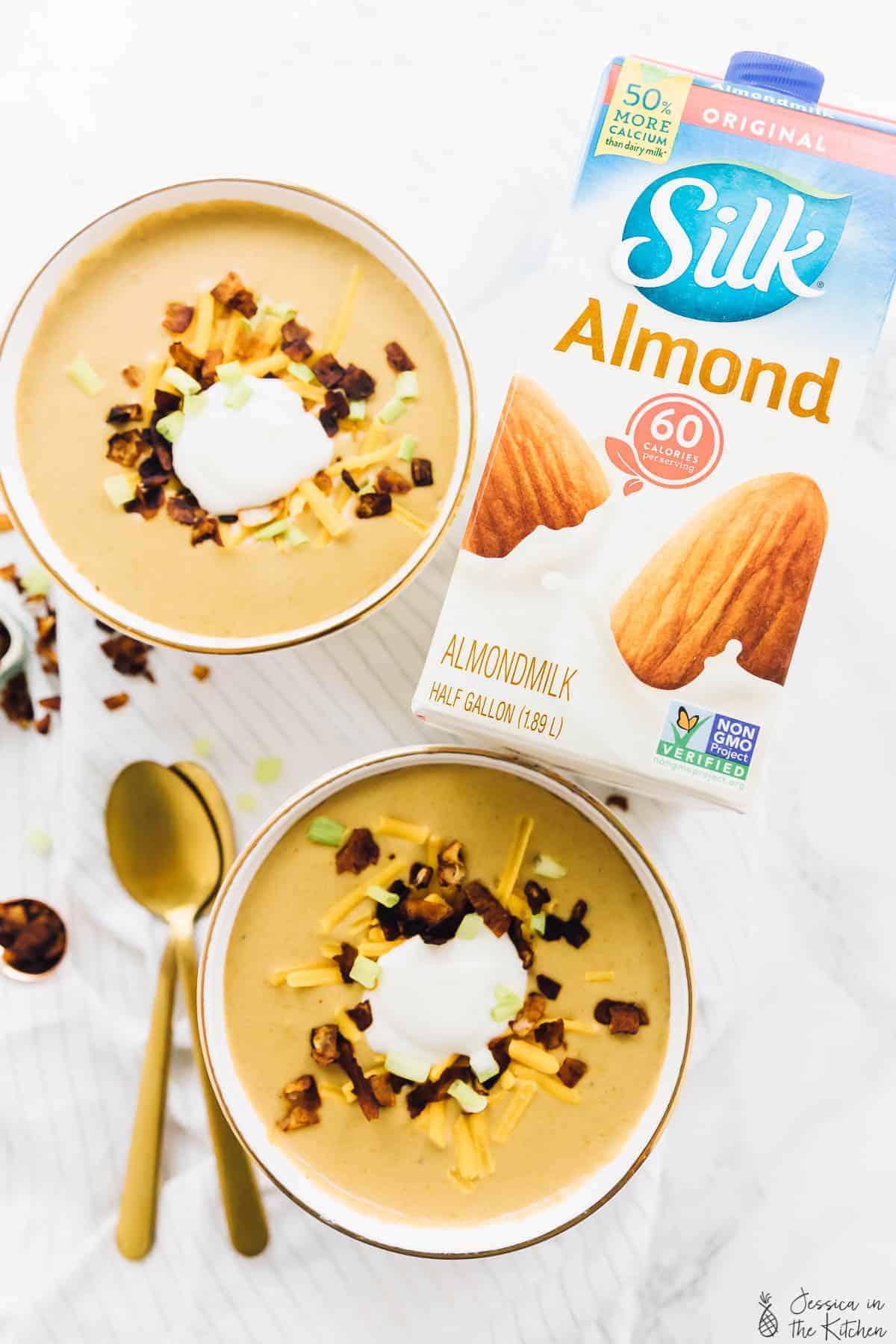 P.S., there are three ways you can enjoy this soup:
1 – completely blended, using an immersion blender, which is my preferred way. Blend the soup together completely to get a thick and rich-tasting soup.
2 – Blend the soup slightly, or maybe just with the potatoes mashed. I know some people enjoy this way, so do whatever pleases you the best.
3 – with less liquid. I loved when my soup was thick, but not too thick, so I added a extra cup of Silk Almondmilk to mine. Since the potatoes are the main thickening agent here, they basically drink up all the liquid, so it works out beautifully. If you want a completely thick traditional loaded potato soup, start with a cup less of liquid, then add it you want it! 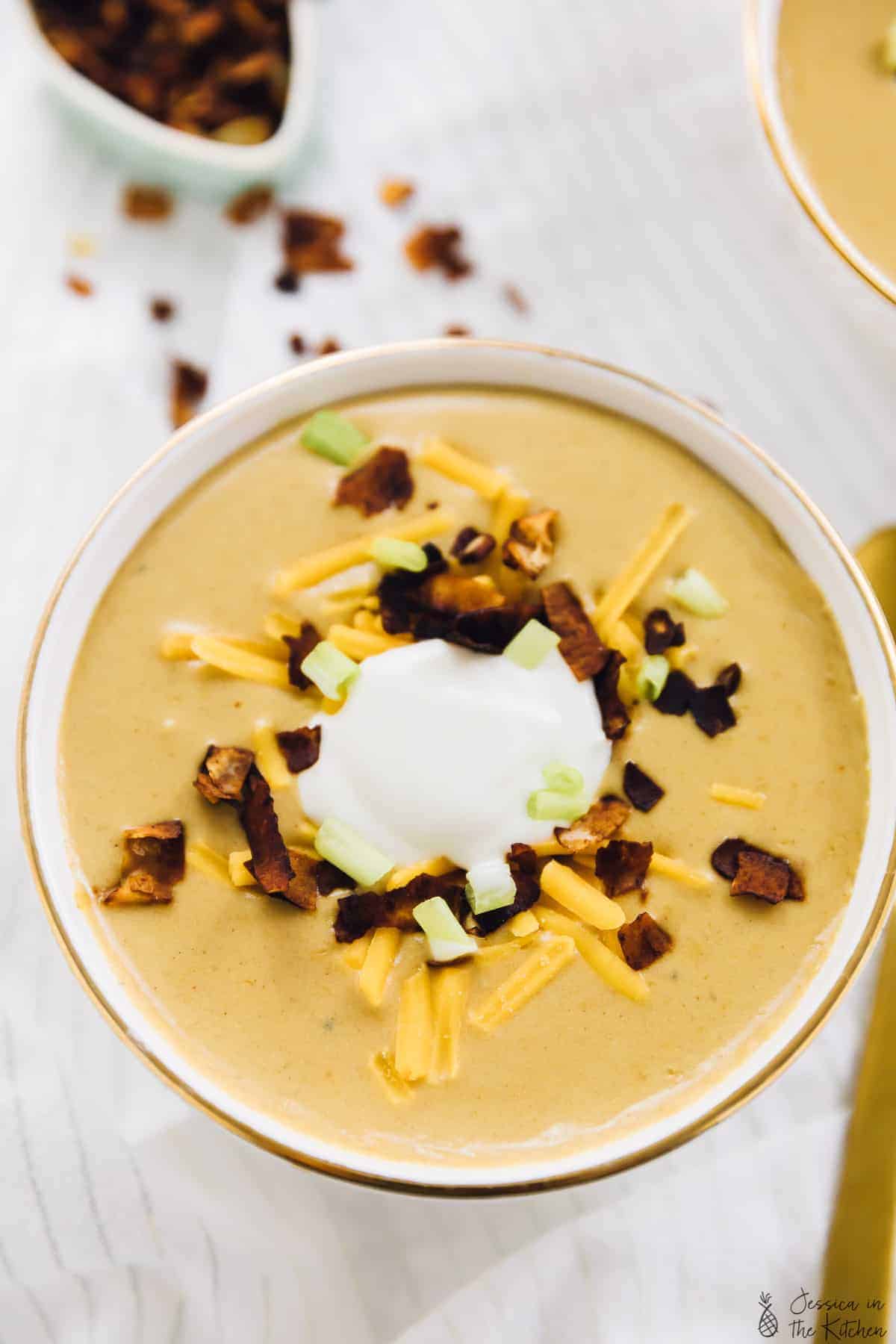 This is a sponsored conversation written by me on behalf of Silk! The opinions and text are all mine. 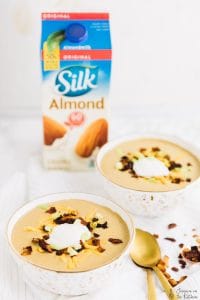 This Vegan Potato Soup will give you all the comfort! It’s made in one pot, blended to perfection and topped with coconut bacon!
by: Jessica in the Kitchen
Prep Time 15 minutes
Cook Time 30 minutes
Total Time 45 minutes
Servings 4 servings
Course Dinner, Lunch, Sides, Soups
Cuisine American
Print
Share
5 from 1 vote
Ingredients

Mixing it all together

This is a sponsored conversation written by me on behalf of Silk! The opinions and text are all mine. 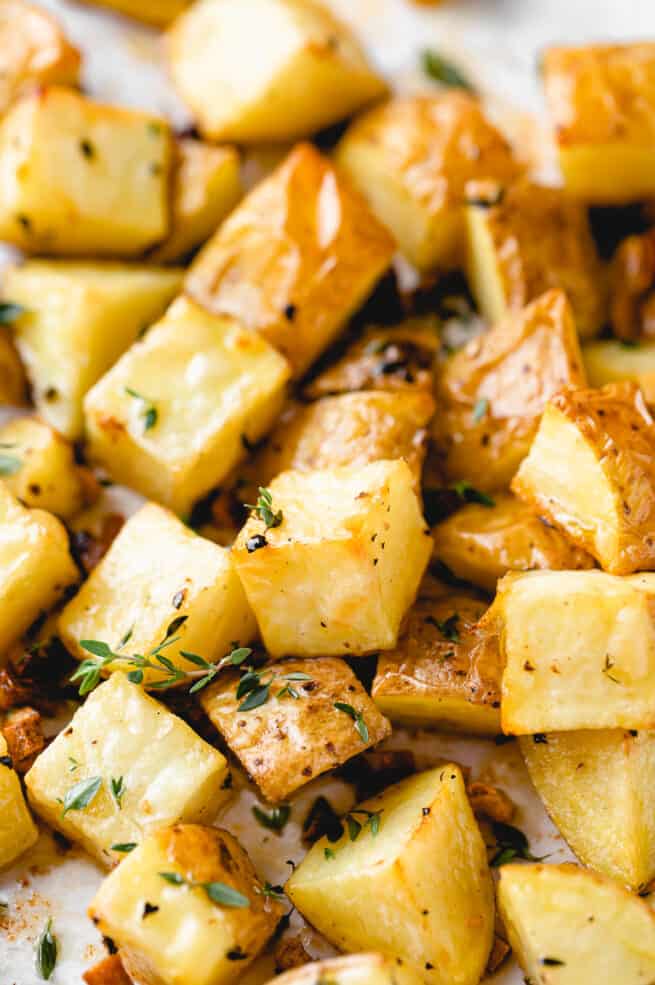 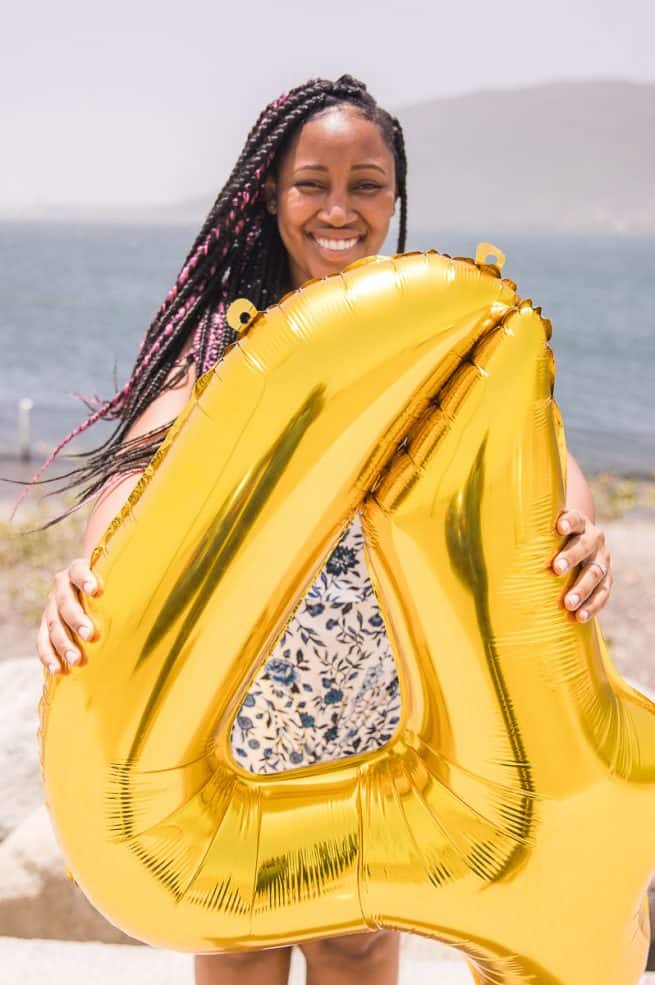 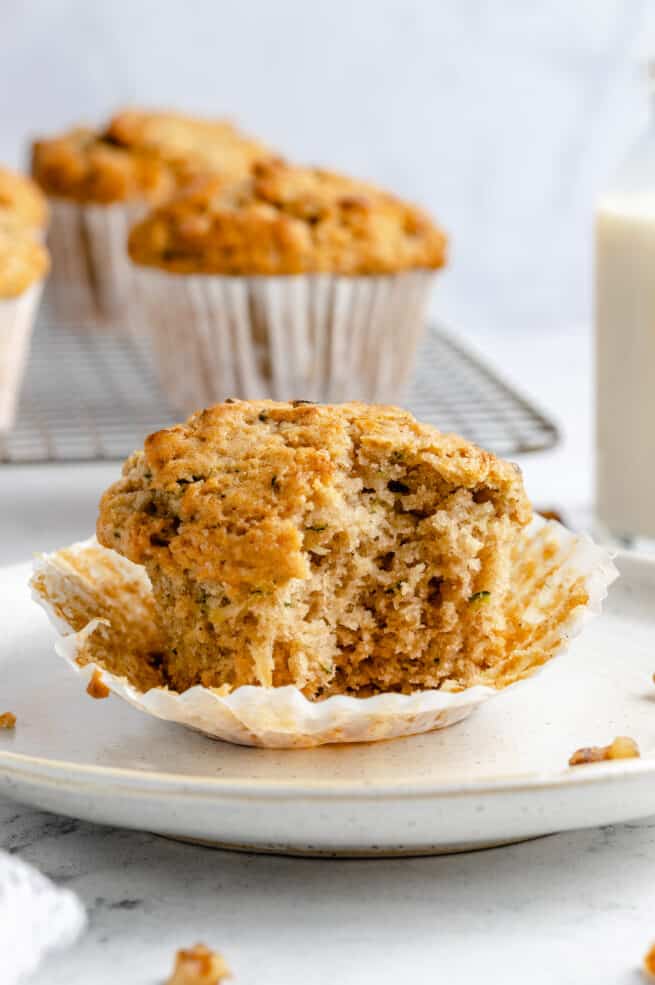