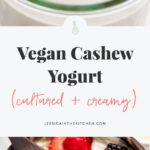 This Homemade Vegan Yogurt (Cultured and Creamy) will absolutely change your life! It tastes identical to store-bought dairy yogurt, tastes absolutely delicious, and can be used in so many ways from breakfasts to dips to dinners! The process to make it is pretty foolproof, and doesn’t require any special tools or ingredients! 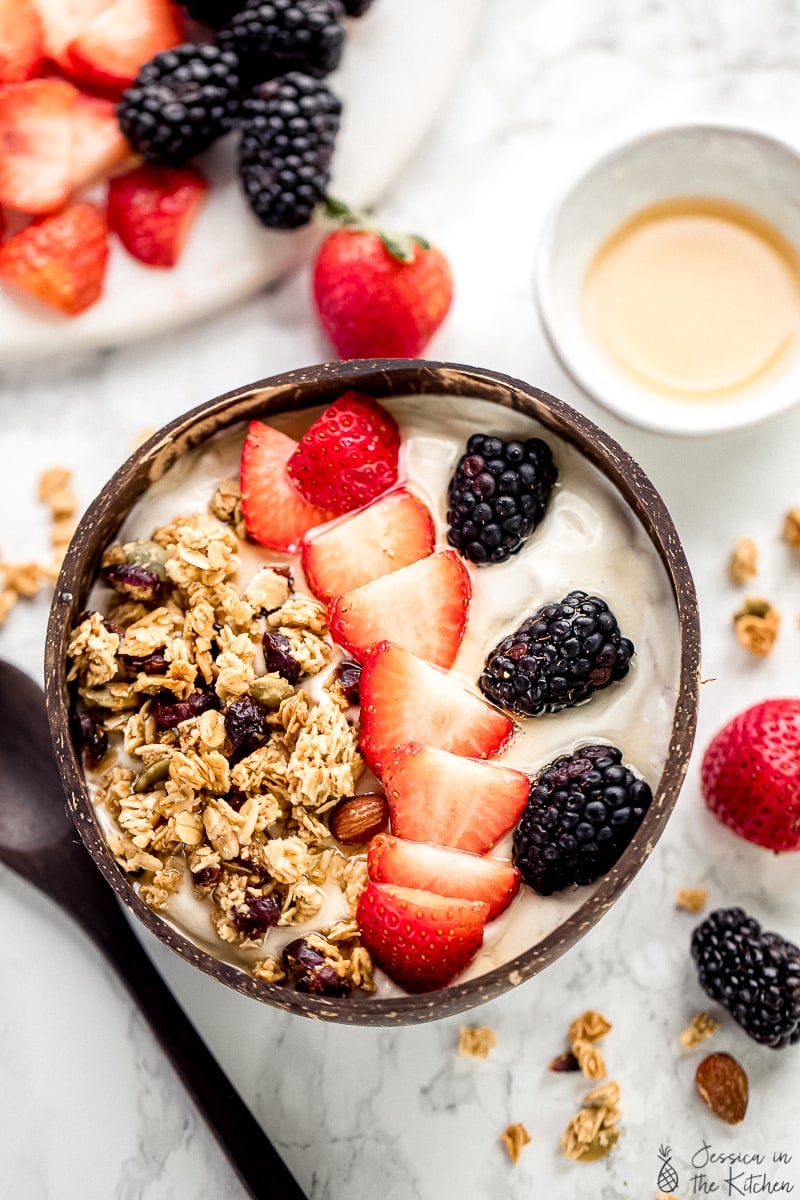 Wow. What a time to be alive where I can make homemade yogurt in my home with no special tools and ingredients, despite what I’ve always heard. Making yogurt from scratch has been a dream of mine. Not, a day dream. I wasn’t writing poems or doodling “Mrs. Yogurt” in my notebooks. It’s just something I’ve always wanted to try. When I took a taste of it though? I might as well have been. Let’s just say this – there’s nothing like that first spoonful of your fresh, creamy, homemade vegan yogurt.

Previously, every time I looked it up, I read that I would need this tool, and that tool, and don’t forget a yogurt maker! A yogurt maker? Who wants to buy a whole yogurt maker? I already have like eight other kitchen gadgets I haven’t used in a year. Then, when I turned vegan, the only way to get vegan yogurt at first was through a starter kit and I wasn’t into it. Years later and life simplified, here we are. Making the most mind blowing and creamy vegan yogurt with water, cashews, probiotics, apple cider vinegar and a blender. 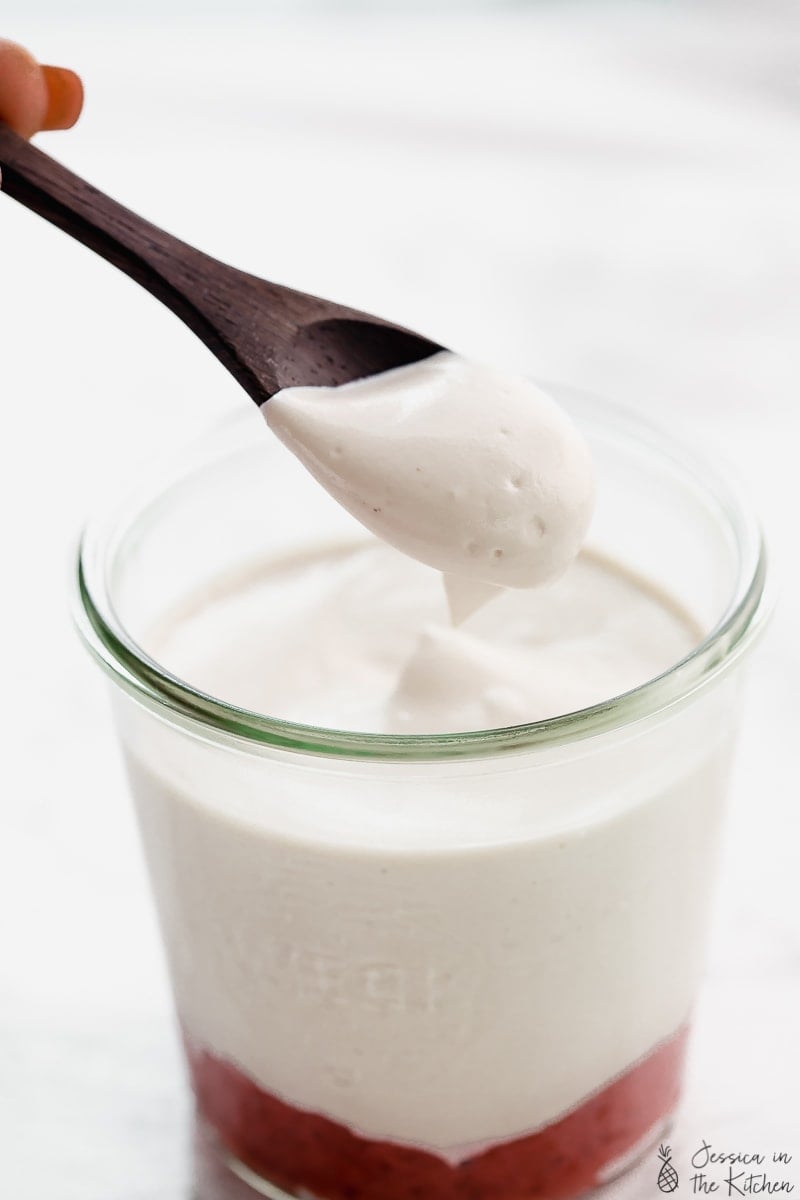 So much to say yet so little time before I bore you. Long story short – make this homemade vegan yogurt. It doesn’t just taste like yogurt – it IS yogurt. It’s a near foolproof, cultured, fermented, good gut bacteria loaded yogurt that’ll satisfy both your tastebuds and your stomach. In fact, I had a mild case of food poisoning from a bad batch of beans that nothing would fix. A few tablespoons of this? I felt so much better.

How to Make Homemade Vegan Yogurt

The process is so straight forward, you might think you’re doing something wrong at first. You’re not. Unless, of course you are, which if you follow my directions, you aren’t :). Blend all the ingredients together, then pour it into a glass bowl or tall jar. Emphasis on glass, I’ll get more into that under “tips”. Now add in your probiotics (open the capsules), then using a wooden spoon or a silicone spatula, stir it in for a good 2 minutes (go pull up a Youtube video, that’ll help). 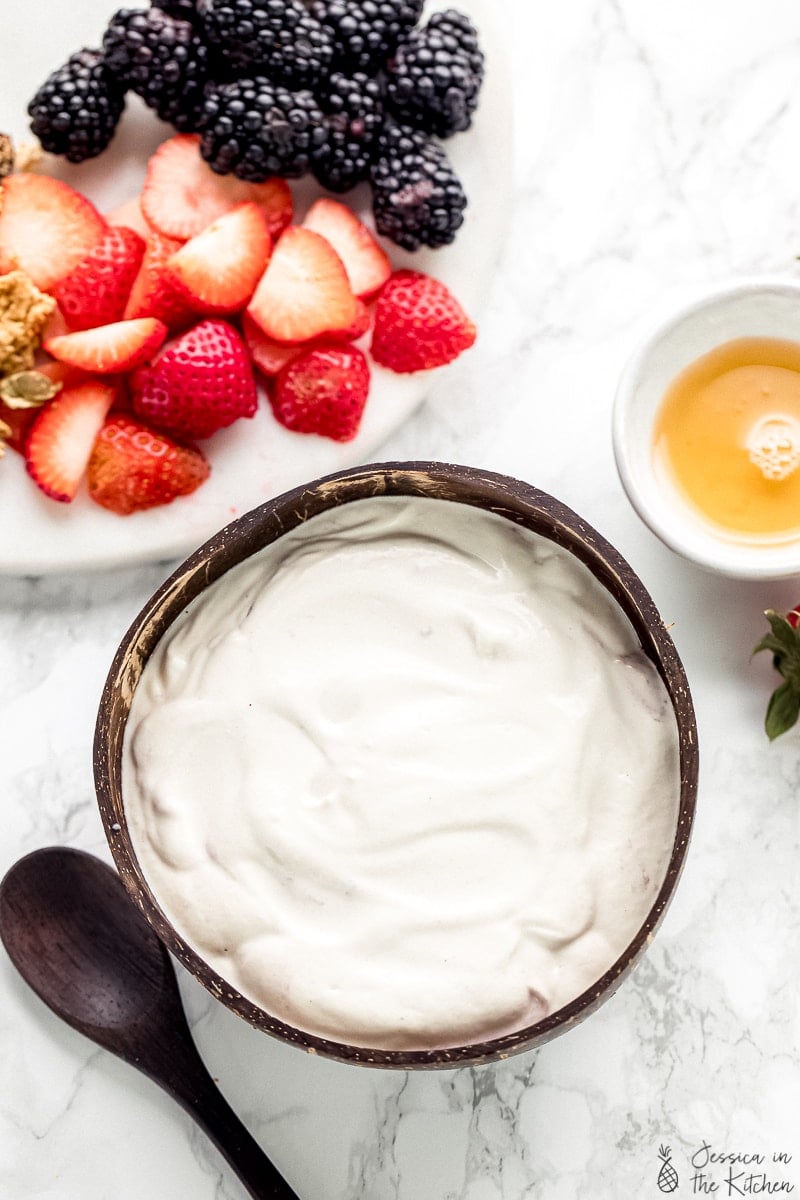 Cover the bowl or jar with a cheesecloth, or in my case since I ran out, paper towel, and a rubber band. Now, it’s fermenting time! Let it ferment in a nice warm place. I live in the tropics, so it’s always warm! So my countertop did just fine. If you don’t, leave it in your oven with the stove OFF and the oven light on.

Allow the bacteria to culture and everything to ferment for 24-48 hours. I found my sweet spot was around 40 hours, so I was just let it sit for the full 48 hours. Feel free by the way to check on it during this process. Everything should look fine, and after about 24 hours, you should start to slightly smell a light yogurt-y sour (not spoiled) smell. Then it’s like a full blown smell by the time 48 hours comes around. Stir, taste, and use like you want

Okay, so there are a few ways you can do this wrong. I’ll try and point them all out here, and will also include them in the instructions down below, too. 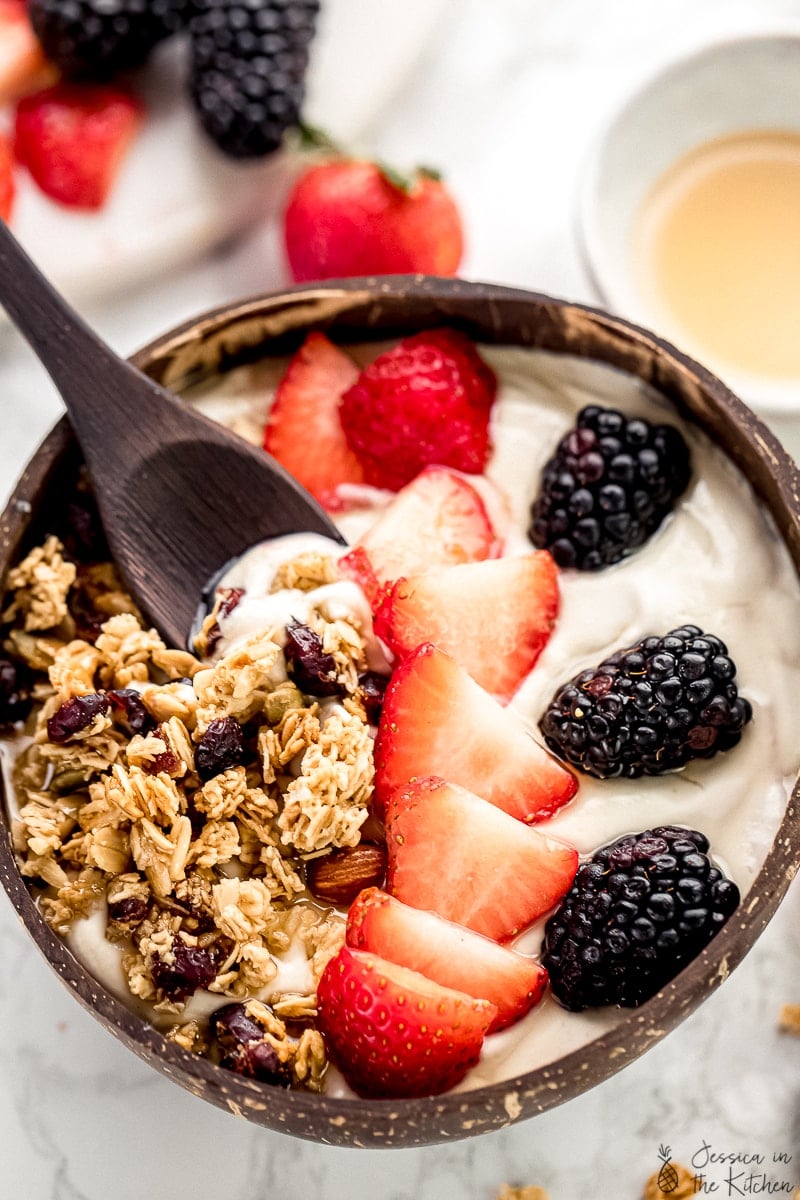 Ways to Use Homemade Yogurt

There are so many ways to use this Homemade Vegan Yogurt. Here are a few of my favourite ways:

Okay, my ode to yogurt is over! Enjoy the recipe friends!

This Homemade Vegan Yogurt (Cultured and Creamy) will absolutely change your life! It tastes identical to store-bought dairy yogurt, tastes absolutely delicious, and can be used in so many ways from breakfasts to dips to dinners! The process to make it is pretty foolproof, and doesn't require any special tools or ingredients!
by: Jessica in the Kitchen
Prep Time: 10 mins
Total Time: 10 mins
Print
Share
Rating: 0 from 0 reviews
Ingredients
Instructions
NOTES

Okay, so there are a few ways you can do this wrong. I’ll try and point them all out here, and will also include them in the instructions down below, too. 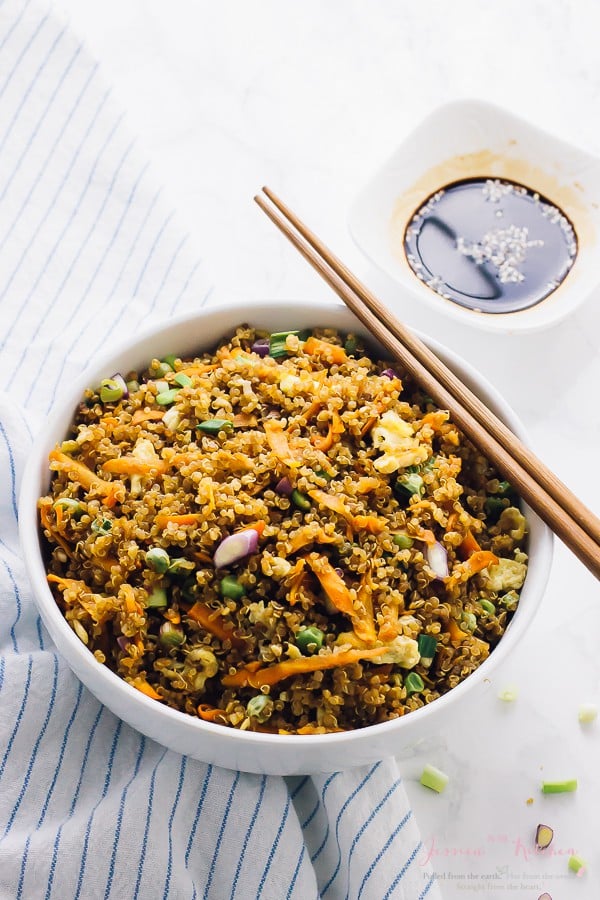 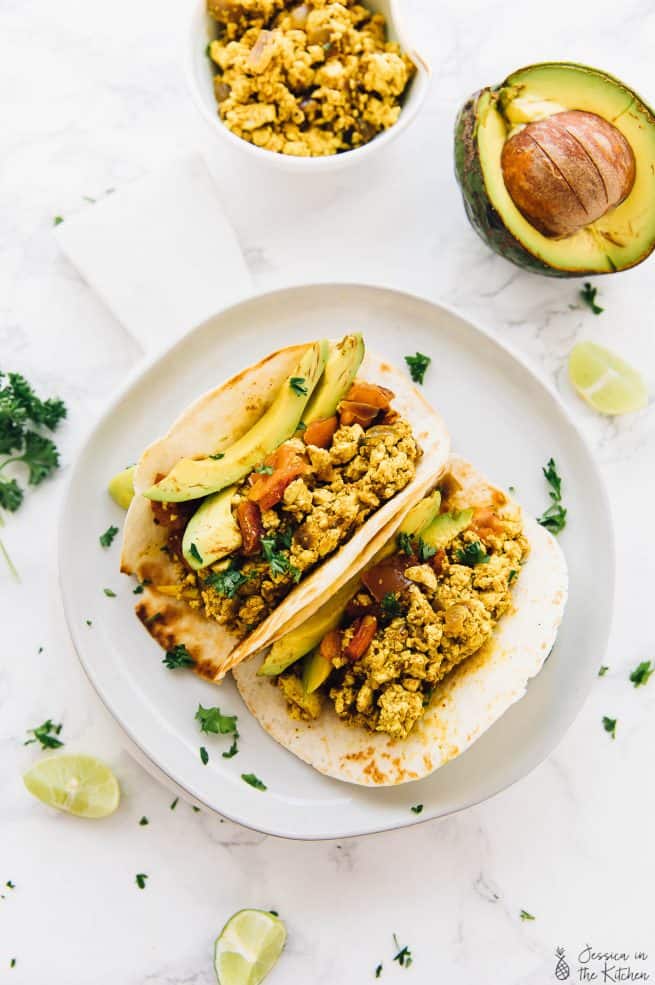 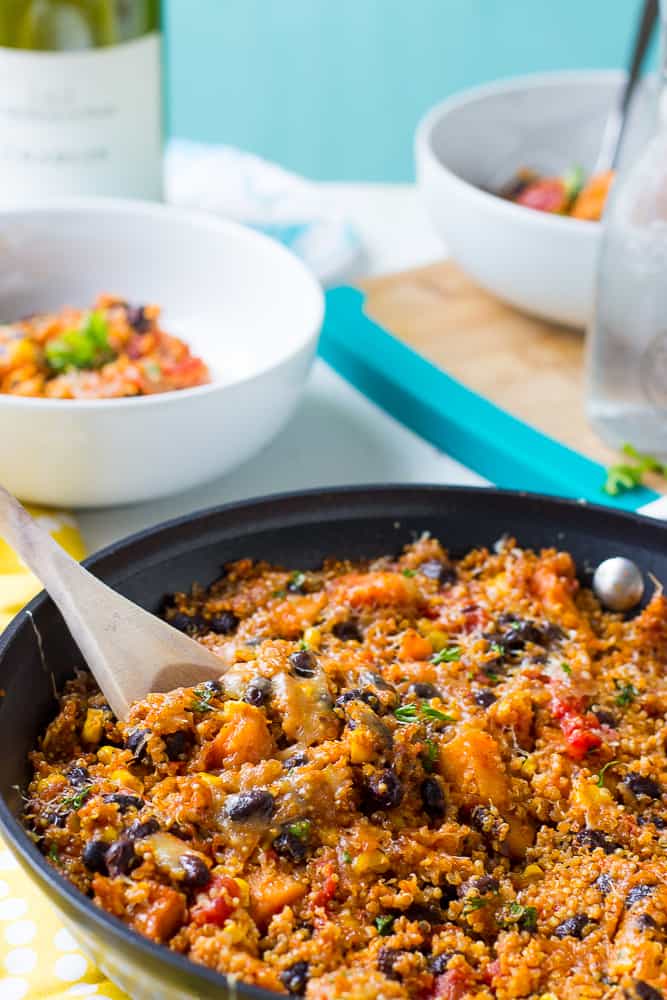