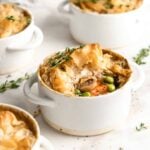 These Vegan Pot Pies are hearty, filling, and packed with healthy veggies. Comfort food goodness in less than an hour!

Plant-based Thanksgiving recipes aren’t easy to come by, but this Vegan Pot Pie is the perfect entree for all the vegans and vegetarians at the table. They’re also easy enough to whip up for a weeknight dinner, so you can enjoy hearty vegetable pot pies all year long! Since they can be customized with your favorite vegetables and add-ins (more on that below!), everyone is guaranteed to love them.

Aside from the ramekins used for baking, this Vegan Pot Pie recipe is a one-pot deal, which means cleanup is a breeze. (We love that, right?) Using a pre-made pastry dough for the crust shaves off your prep time, without sacrificing flavor. And if you’re making vegetable pot pies as a vegan main dish for Thanksgiving, you can prepare these in advance so they’re ready to pop into the oven on the big day.

WATCH THE VIDEO TO SEE HOW IT’S MADE:

How to Make Vegan Pot Pie

There’s no need to fuss with making your own crust for this recipe, which means these pot pies are pretty much fail-proof!

Prepare. Preheat your oven to 375ºF and set out three ramekins.

Sauté the vegetables. Melt the vegan butter in a pan over medium heat, then add the onion, carrots, celery, mushrooms, garlic, and thyme. Cook the vegetable mixture until onions are translucent and the carrots have softened, which should take about 8 minutes.

Make the sauce. Add flour and stir to coat the veggies. Keep cooking until the flour has browned a bit, then pour in the vegetable broth. Season with salt and pepper to taste. Bring the mixture to a boil, then reduce heat and simmer for about 5 minutes, or until the vegetables are tender.

Finish the filling. Add the frozen peas to the filling mixture, stir, and remove the pan from heat. Season to taste with salt and pepper.

Assemble the pot pies. Pour the filling into the ramekins and top with a piece of phyllo, pie, or puff pastry dough cut to size.

Bake. Bake the pot pies for 30 minutes, keeping a close eye on the tops to make sure they don’t brown too quickly. If they do, cover them with foil.

Can I Make This in Advance?

Yes, you can make Vegan Pot Pies up to 3 days in advance, then reheat them. For best results, I recommend making the filling and refrigerating it; then when you’re ready to bake the pot pies, you can top them with the pastry.

Here are a few tips to help you make the best Vegan Pot Pies!

Use this Vegan Pot Pie recipe as a template for comfort food deliciousness! Here are some ideas for switching things up:

The fabulous thing about Vegan Pot Pies is that they’re pretty much a one-dish meal! If you want to pair them with a side, I suggest a light salad: Vegan Caesar with Coconut Bacon or Healthy Kale Cabbage Slaw would be perfect.

How to Store and Reheat Pot Pie

Store Vegan Pot Pies in the refrigerator, covering the tops with foil. I like to remove the crust, reheat the rest of the pie in the microwave, then reheat the crust for the last 10-20 seconds to keep it crispy. Alternatively, you could reheat it in your oven at 350ºF for about 10 minutes.

Can I Freeze This?

Yes, Vegan Pot Pies can be frozen. Once they’ve cooled, wrap them tightly with a layer of plastic wrap, followed by a layer of foil. Pop them in the freezer for up to two months. To reheat, thaw the pies in the refrigerator, then bake them at 350ºF for 10 minutes, or until warmed through, or bake them for 40 to 60 minutes if they’re still frozen.

Enjoy friends! If you make this vegan pot pie recipe, please snap a photo and tag #jessicainthekitchen on Instagram! We’d also love it if you would leave a comment below, and give the recipe a rating! Thanks so much! 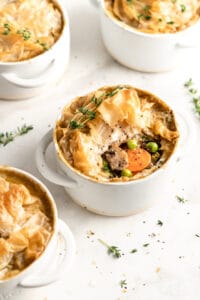 These Vegan Pot Pies are incredible and are done in less than an hour! They are loaded with only healthy, delicious and filling ingredients!
by: Jessica in the Kitchen
Prep Time 10 minutes
Cook Time 45 minutes
Total Time 55 minutes
Servings 3 servings
Course Dinner
Cuisine American
Print
Share
5 from 3 votes
Ingredients

NOTES
This recipe is vegan and easily gluten free.

Vegan Nuggets 😍 it's been a while since I've sh