Recipes | November 26, 2014
These Garlic Butter Roasted Potatoes make a quick and easy last minute side dish in under 30 minutes. They are light, taste deliciously crispy and buttery! 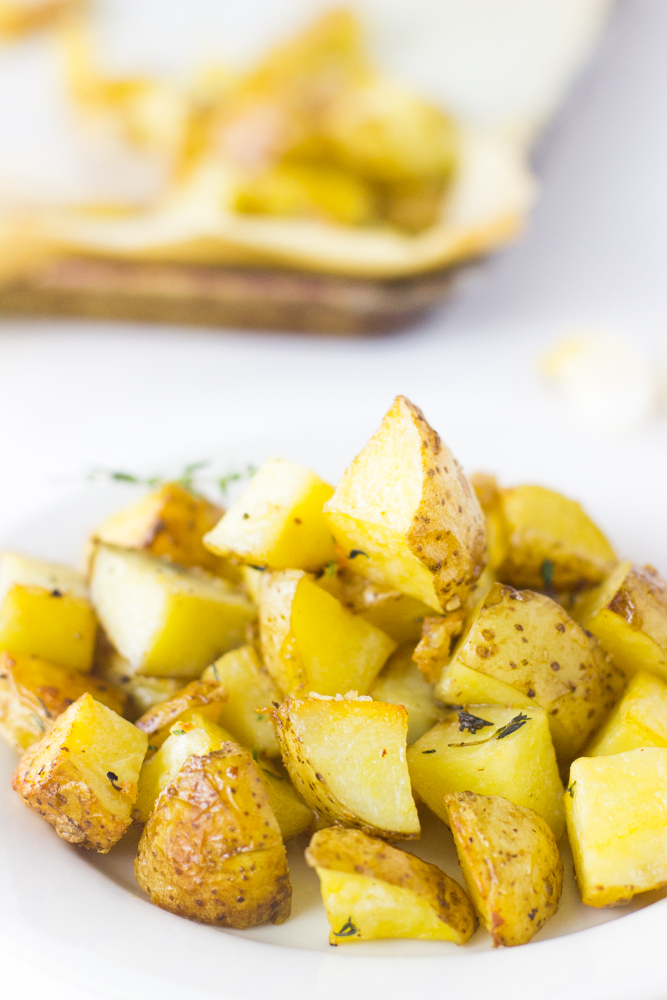 With thanksgiving coming up tomorrow, I wanted to share one last last minute dish before the big day! This recipe has been a family favourite for a LONG time thanks to Mr. Bakes intuitive cooking skills that started with wedges, led to fries and not to these roasted potatoes. Every time he says he’s cooking something new, I sit back, grab a plate and watch with hungry eyes. True story. 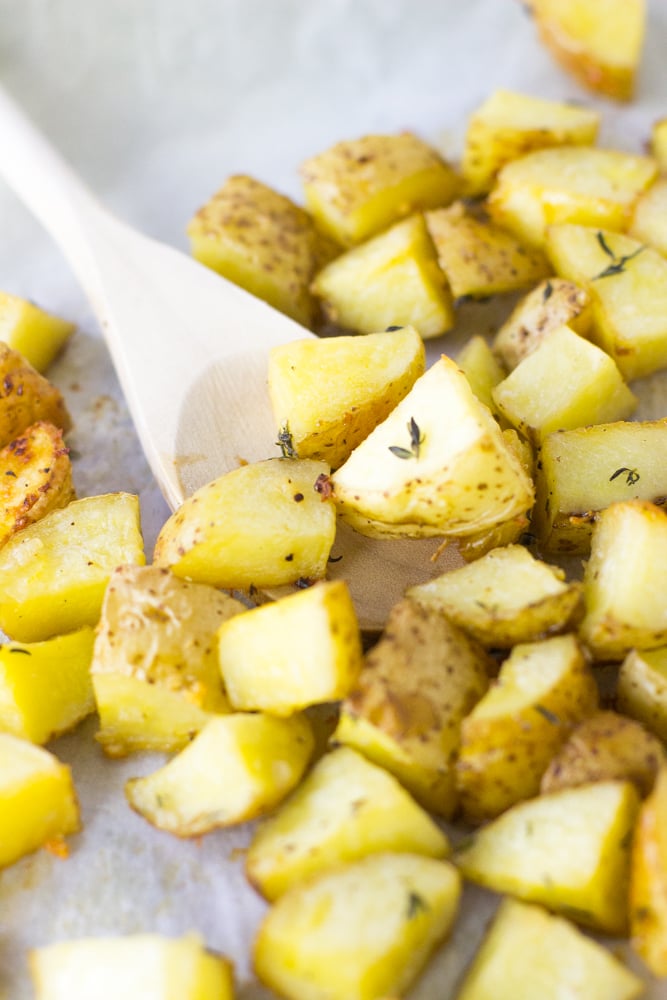 Why I love this recipe is that is truly is very simple and easy and often serves as a side to our weeknight meals because of how quickly it can be whipped up. Mr. Bakes cuts the potatoes in half, then each side in quarter and so on until you’re left with 1 inch pieces. After they’ve been cooked you’re left with golden, buttery and most importantly crispy potatoes. 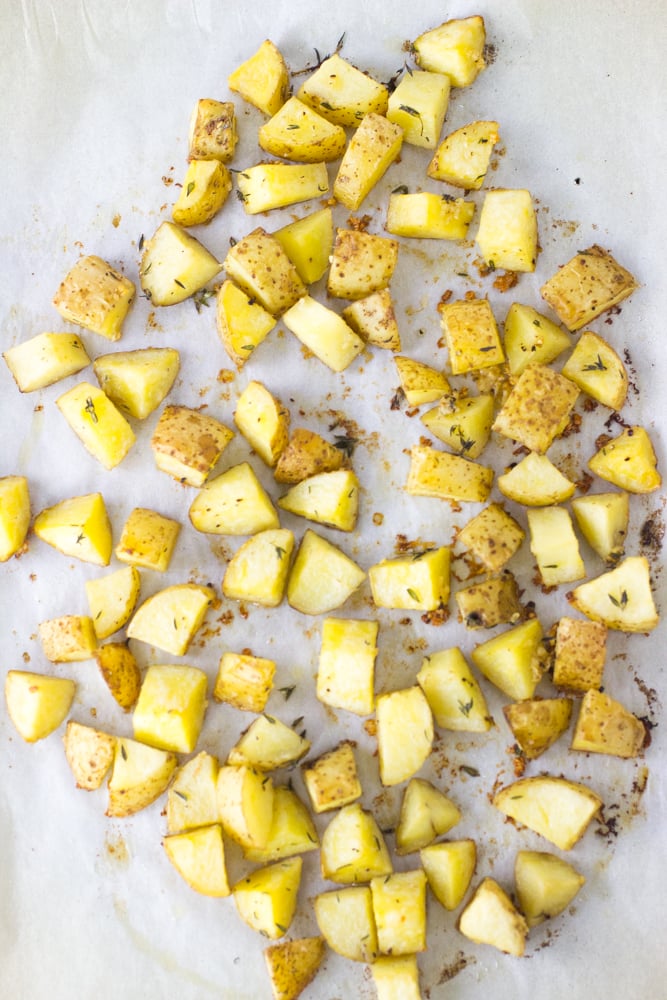 I’d like to think the secret of these potatoes are to things: leaving the skins on, and roasting them with the chopped garlic tossed in the mixture. It creates an aroma that fills your kitchen and a taste that seeps into the potatoes for when you’re devouring them later. Also, by chopping the garlic instead of mincing it, it won’t burn.

Don’t let the buttery part throw you for the loop – I used vegan butter for mine but you can use what you have, and after the potatoes have been lightly tossed in olive oil, then sprinkled with seasoning and are ready to hit the oven, a bit of melted butter is drizzled over them. You may think a little bit over a large amount wouldn’t make a difference but we saw a huge difference when we started adding this step. The potatoes are suddenly infused with a richer flavour that is mostly because of the fragrance of the butter and it melting into the potatoes while its roasting. Mr. Bakes loves to add in thyme which also makes such a difference over regular roasted potatoes – the scent is absolutely heavenly! 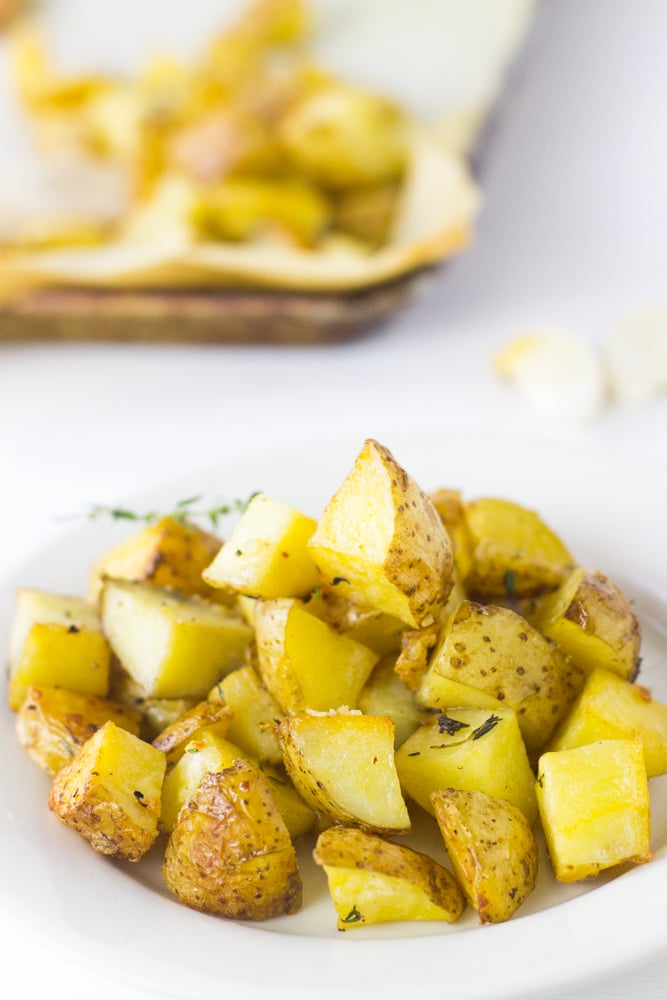 I’ll step out so that you can step in and whip these up! This simple garlic roasted potatoes have proven time and time again to be a crowd pleaser and even when we make large batches, they always finish quickly! 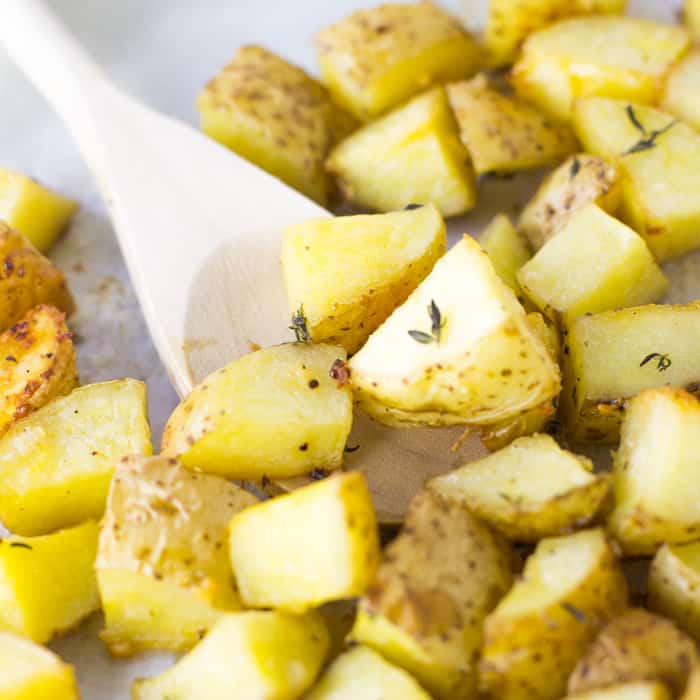