These Banana Bread Waffles are like having dessert for breakfast, but healthy! They’re sweetened with bananas, gluten free and are so meal preppable! 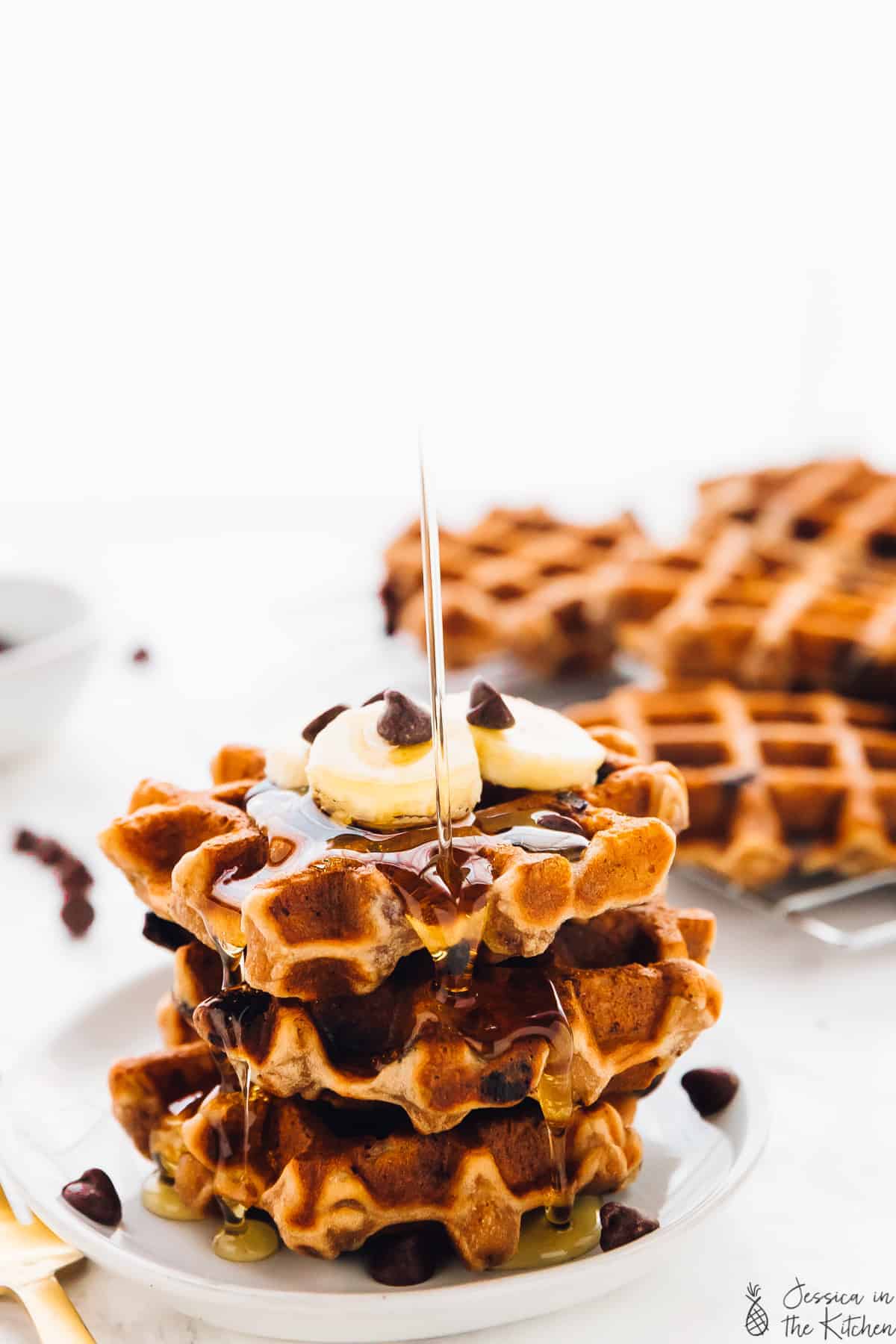 “These are the best waffles I’ve ever had”. That was what my friend Ashlee, who came to stay with us this month with her husband Tommy, posted on her IG page after I made these waffles. I was recipe testing them, very critical of myself, and put them in the freezer the night before. Needless to say, that comment made it pretty clear that was being harsh on myself, and also that I needed to share this waffle recipe with you guys.

Banana Bread Waffles (with Chocolate Chips). I debated on so many different names for for this recipe. Included were “Chocolate Chip Banana Waffles”and “I Want To Eat These All The Time Waffles”. Ultimately, I settled on Banana Bread Waffles (with Chocolate Chips) because they really do remind me of enjoying one of my favourite treats for breakfast. These waffles are an adaptation of my Orange Cranberry Waffles and my Lemon Poppyseed Waffles, but are so different that looks like you’re just going to have to try all three! Without a doubt – they are worth a try and a recipe I’ve been making and adapting all of 2019 so far. 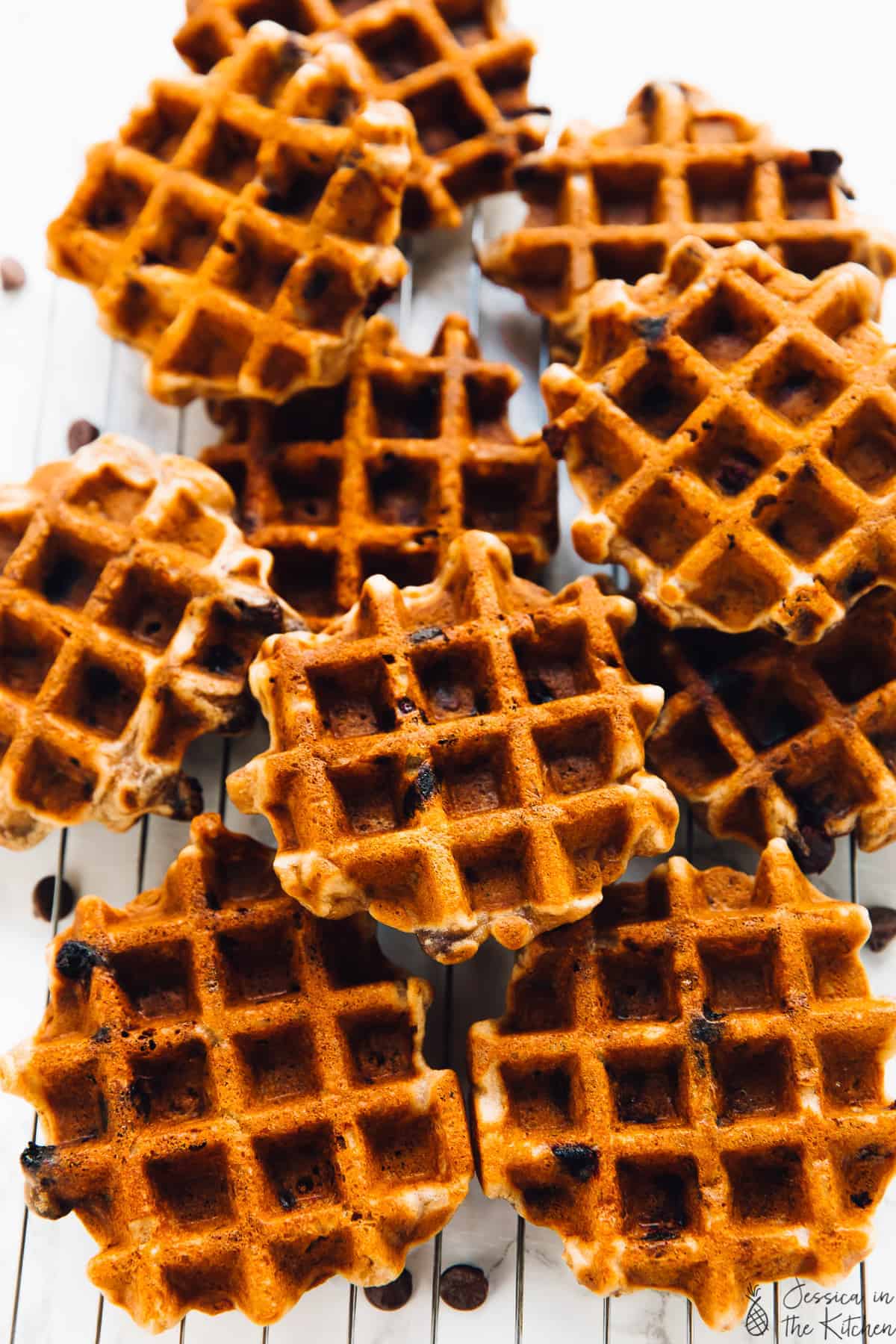 Let me dive right in These banana bread waffles as a secret ingredient. Cassava flour. Ever since I made my healthier blueberry muffins, I’ve been experimenting with cassava flour in all the things. It has won my heart in terms of single gluten free flours, because of so many reasons. I grew up with cassava in Jamaica, so there’s that connection. Cassava flour is also gluten free, paleo, and pretty nutritious. It has a beautifully fine texture (almost like powdered sugar), and tastes so much like wheat flour. I really do mean that – you will not know that these are gluten free. 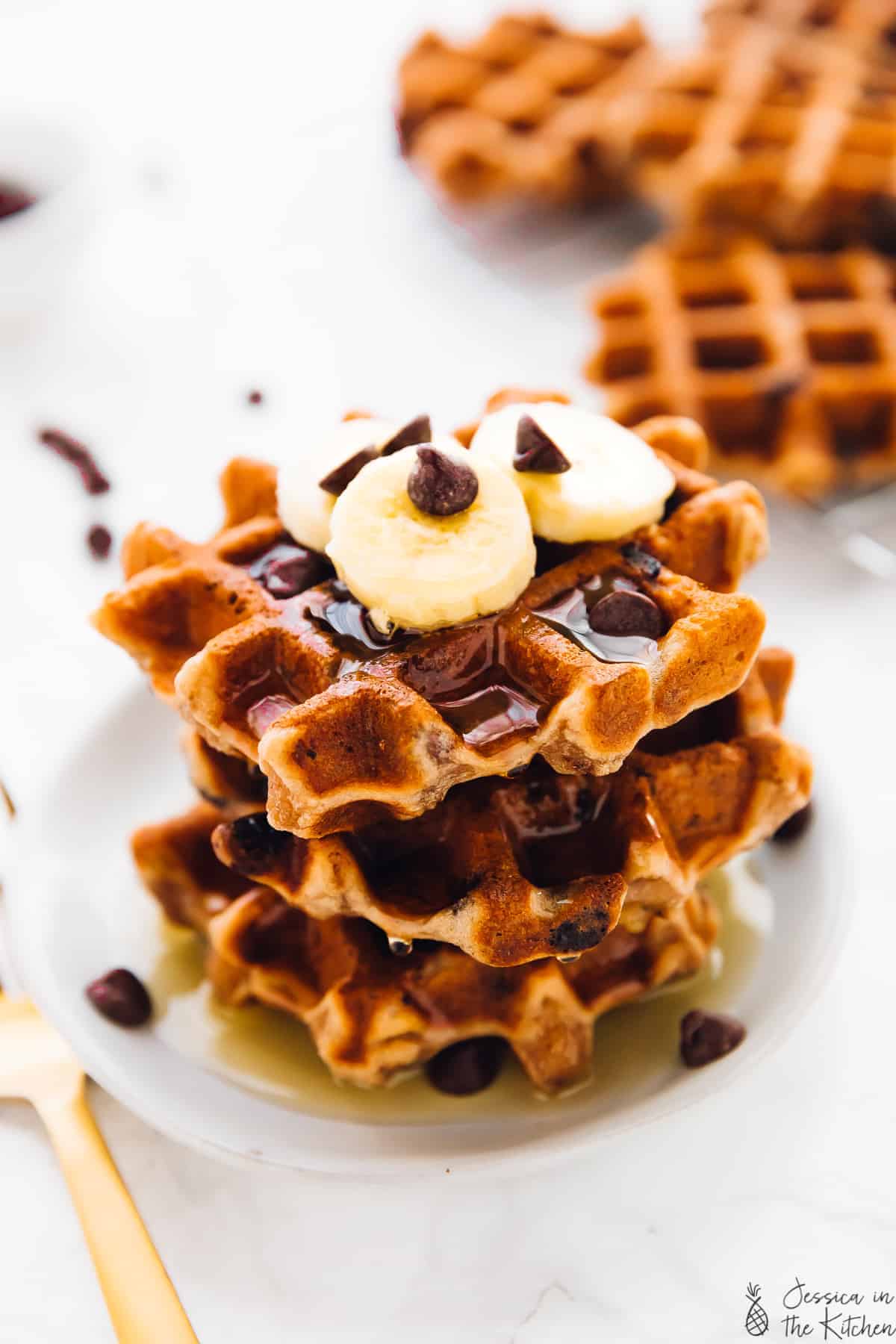 I swapped my usual oat flour for cassava flour in these waffles and I might never go back. While I love the oat flour, the combination of GF flour blend and cassava flour creates that “I ordered this from a breakfast bakery” kind of waffles. That plus the divine subtle banana taste and of course, the chocolate chips. In fact, between the bananas and the chocolate chips (which are totally optional), I didn’t add any maple syrup or coconut sugar into these waffles. That’s a first for me and anther top reason I’m loving these Banana Bread Waffles. That and the fact that the batter makes 13 waffles – hello meal prep! 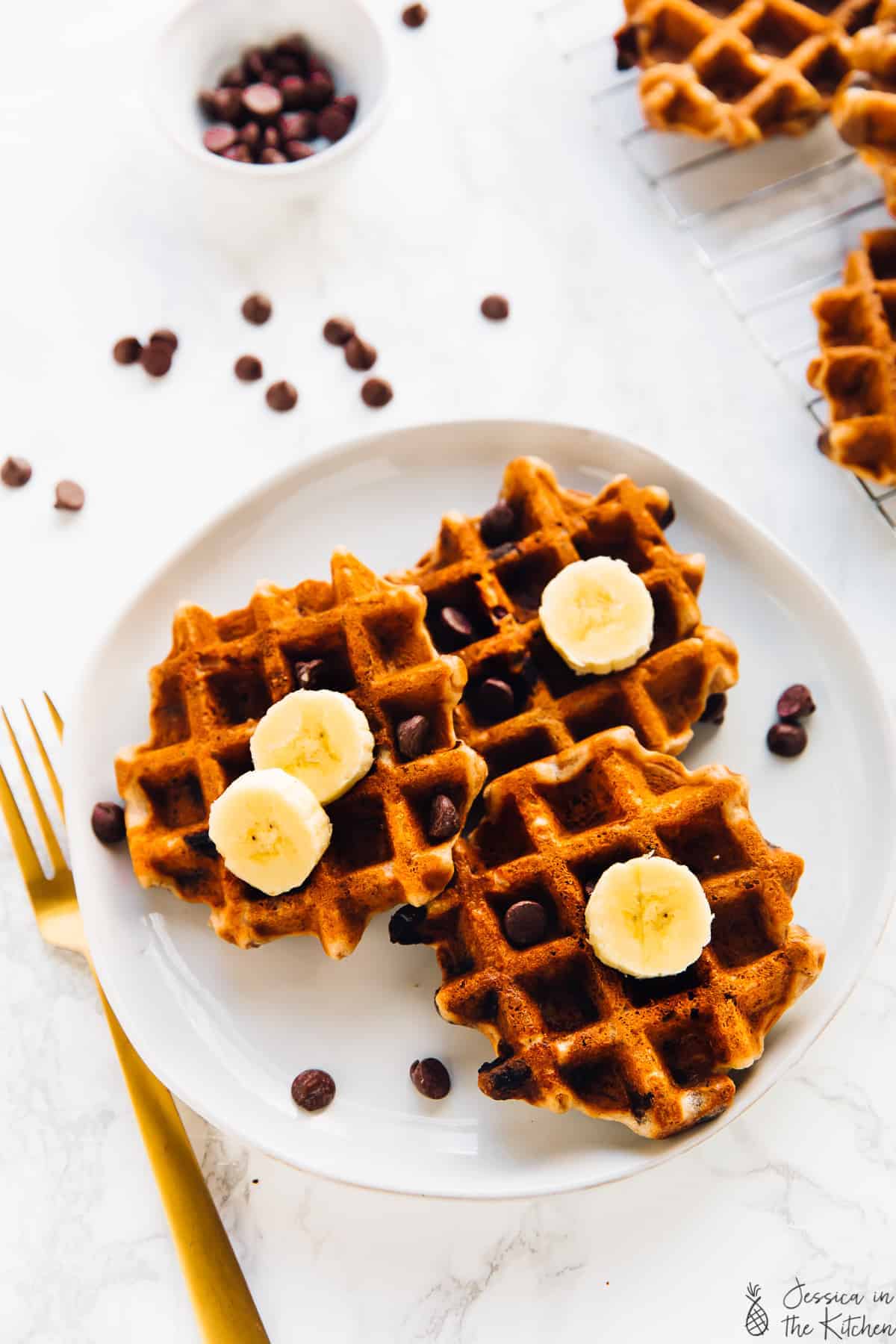 Now that we’ve gone into all the lovely history behind these waffles, you need to dive in friends. Top them with banana slices and you’ll realise you won’t even need maple syrup. I mean, I still top them with a tiny bit. But I’m telling you, they are perfect just as they are. Enjoy, friends! 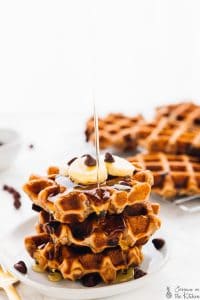 NOTES
Notes
I used 1/4 cup because the nuts and chocolate chips and banana make this batter very chunky. If you’re modifying it and leaving any of those out, you might need to use 1/2 cup. 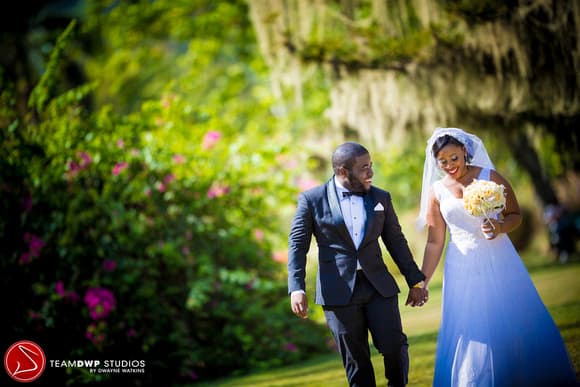 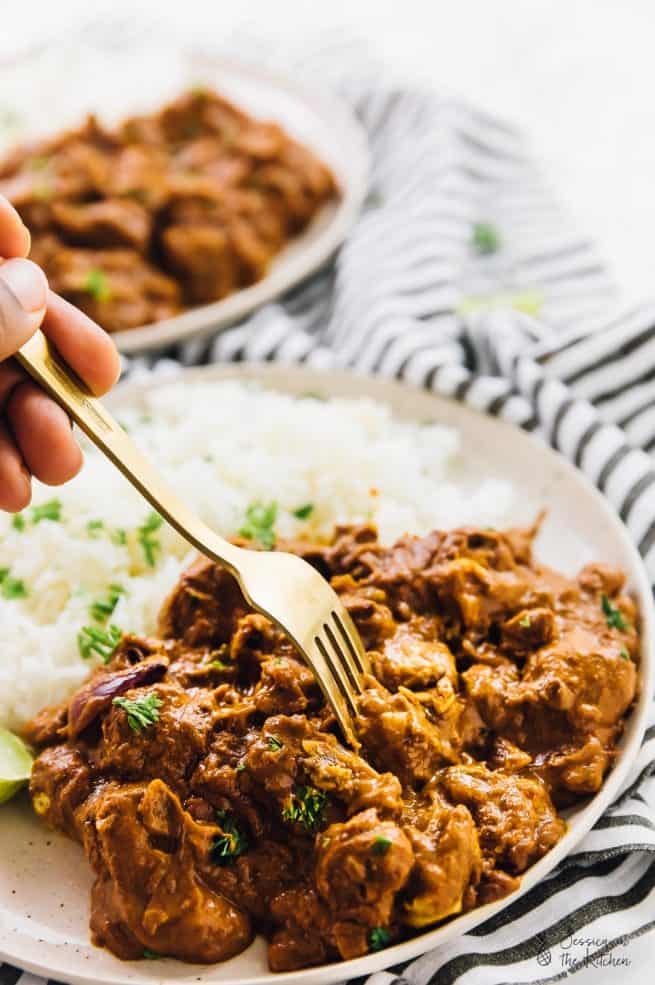 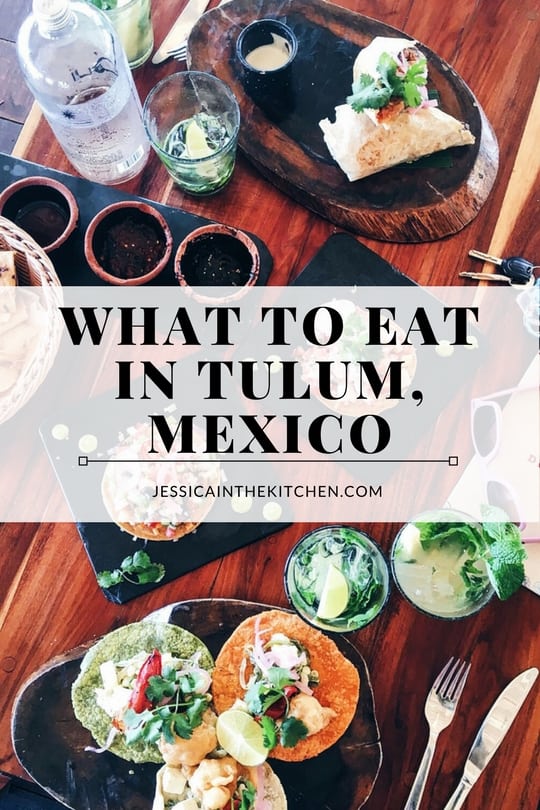 What to Eat in Tulum, Mexico (+ A Mini City Guide)

NEW! Vegan Zucchini Bread 🍞🍯💚 has been SO

Mexico City 🇲🇽, you've been so good to me! T

New on the blog is this Creamy Mushroom Risotto is