These Crispy Cauliflower Tacos with Chipotle Crema are the BEST tacos I’ve ever made! They are served with a healthy kale cabbage slaw for an irresistible taco dish! 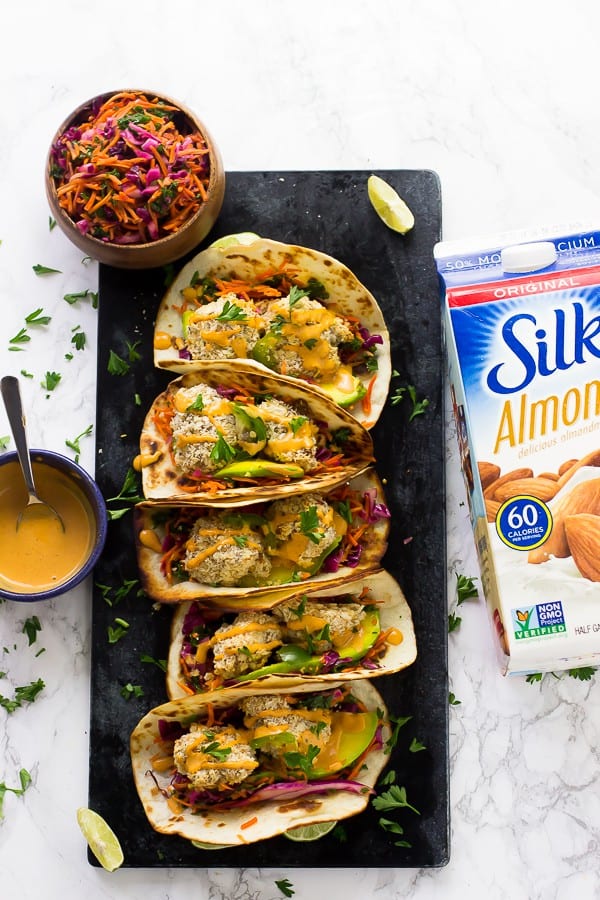 I can’t believe in all my blog posts I’ve never made a cauliflower taco recipe. How did that happen?? Anyway, not only did I fix that, I came back with a bang with this recipe. These Crispy Cauliflower Tacos are seriously the BEST tacos that I’ve ever made, no joke. One bite and both the Mr. and I declared it instantly. Every bite is kind of like a mini adventure. I love adventures, don’t you? 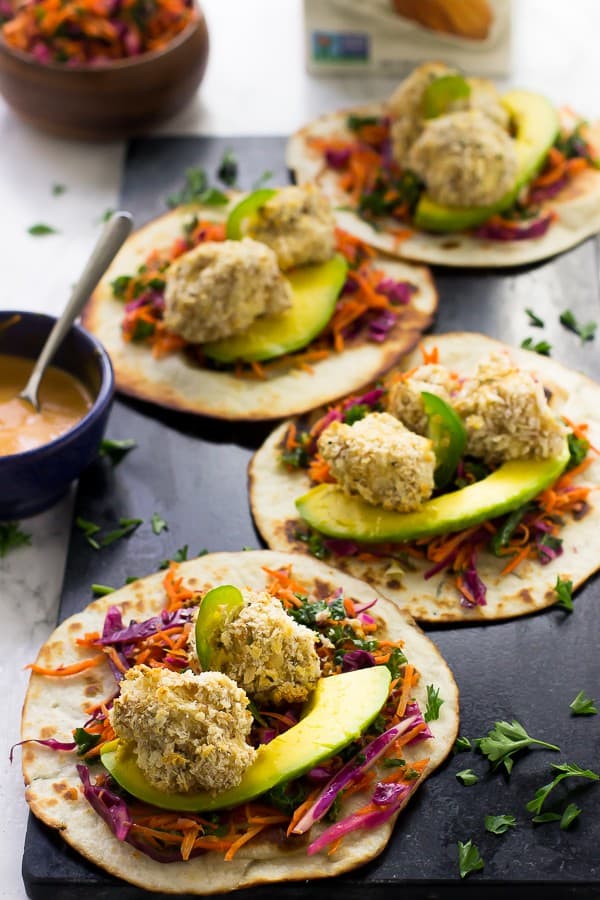 I knew I wanted to achieve three things in this post: cauliflower, a unique way to use Silk Almondmilk, and something spicy and crispy. I’ve used Silk Almondmilk in every single recipe that requires milk but I wanted something new, something that wasn’t a liquid recipe or a cold recipe. Everything basically pointed straight to making tacos, and I’m so glad that I did. I used one of my most popular recipes, my cauliflower wings, and turned them into crispy cauliflower bites for these tacos. They were the perfect combination of crispiness on the outside but divine and flavorful on the inside, and the right amount of spice to them.

I used the Silk Almondmilk in the batter for the cauliflower. I love battering my cauliflower before baking them because it truly transforms them from a raw veggie to a really delicious taco filling for these Crispy Cauliflower Tacos. The batter is gluten free and actually pretty healthy, but makes all the difference. 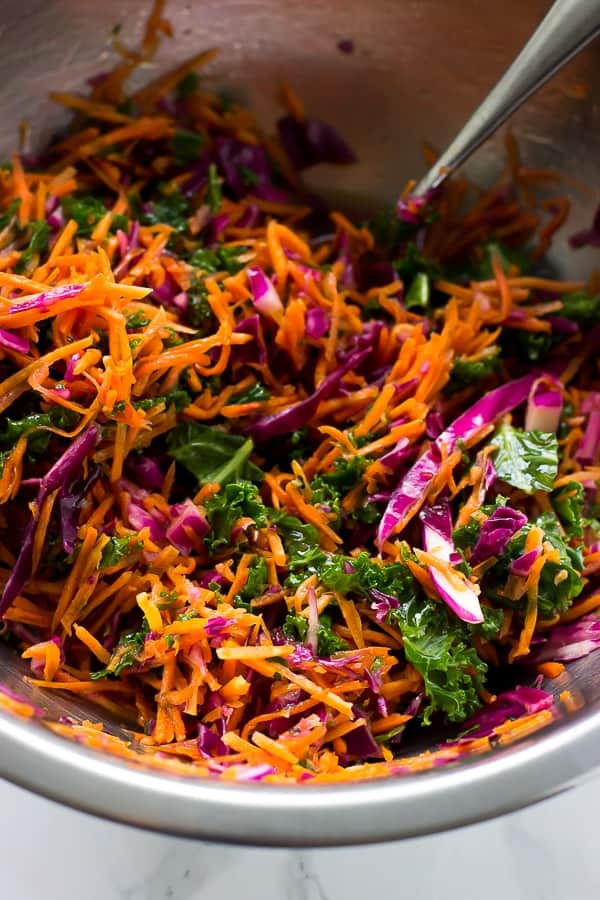 By the way, you can’t even tell that it’s cauliflower! It’s so transformed that every time I try them I forget for about 10 seconds what I used to make them. We may or not have taste tested about 10 of these piping hot straight out of the oven, just to be sure, you know? Totally worth it. 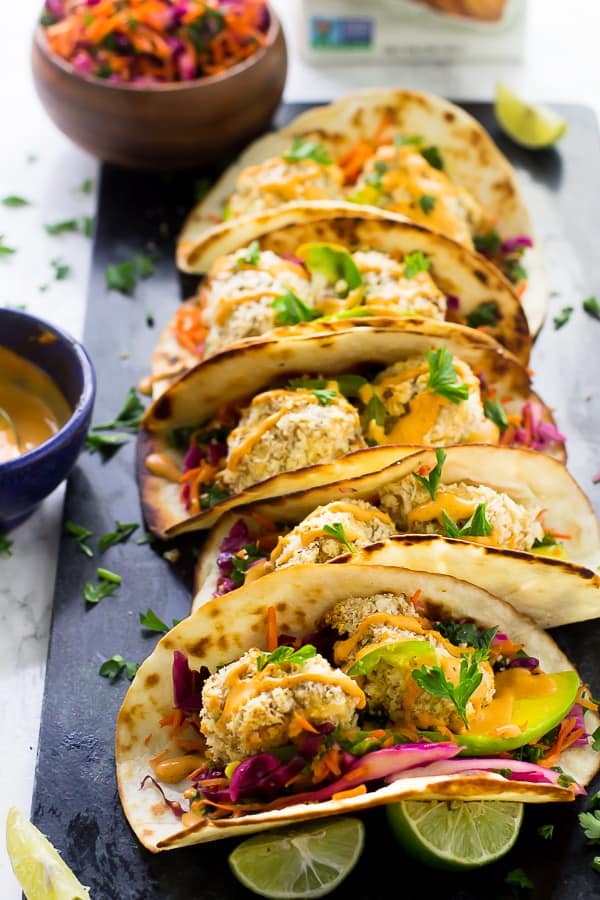 While the cauliflower bites were baking, I got to making the slaw. It’s as simple as shredding, mixing and leaving them. Seriously, it’s SO easy. I made it for a separate post coming closer to fall, but had to kind of go all spoiler alert on your and share them. I couldn’t NOT put them in these tacos because it was that good, AND healthy.

The chipotle lime crema was actually my favourite part. Creamy, spicy, garlicky and so, so addictive. It topped off the tacos perfectly and is customisable. We’ve actually been using it in sandwiches and taquitos since then so do yourself a favour and make even more that is required. 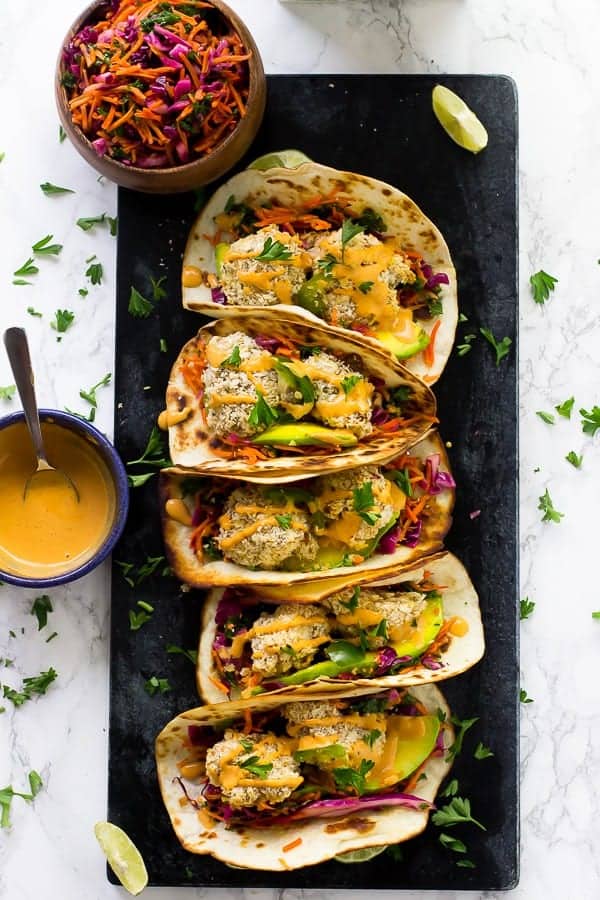 All in all, these tacos are an absolute dream. I love that the Silk Almondmilk had such a major role in transforming the cauliflower, ultimately making the entire taco. I used it in the chipotle lime crema also to thin it out for drizzling, so you get a great dual use out of it.

P.S. the ingredient list for these tacos is long, I’ll admit, but I promise, it isn’t hard to make. Everything low with each other and perfectly complements each other. I’m seriously getting hungry just writing this, so I think I’ll let you dive right into making them. Bon Appetit! 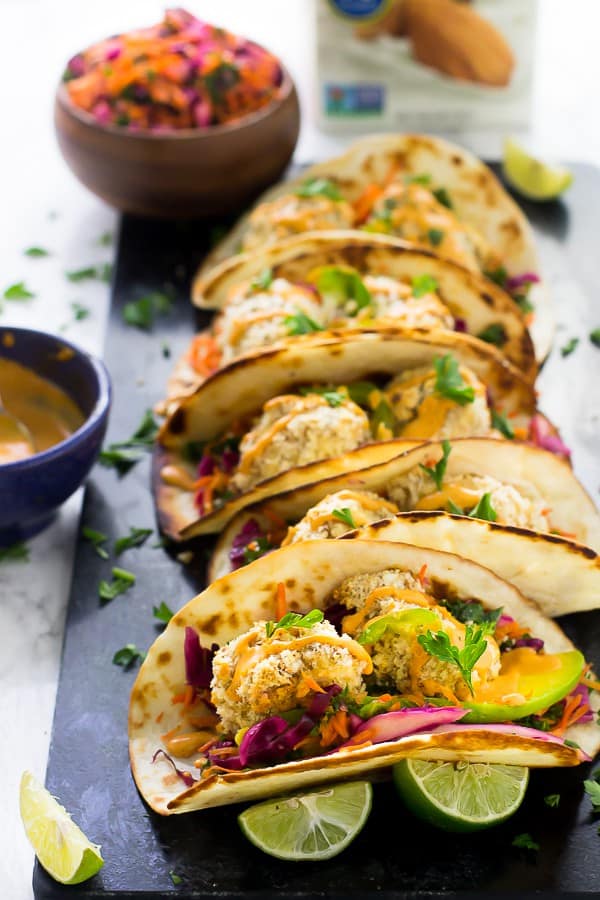 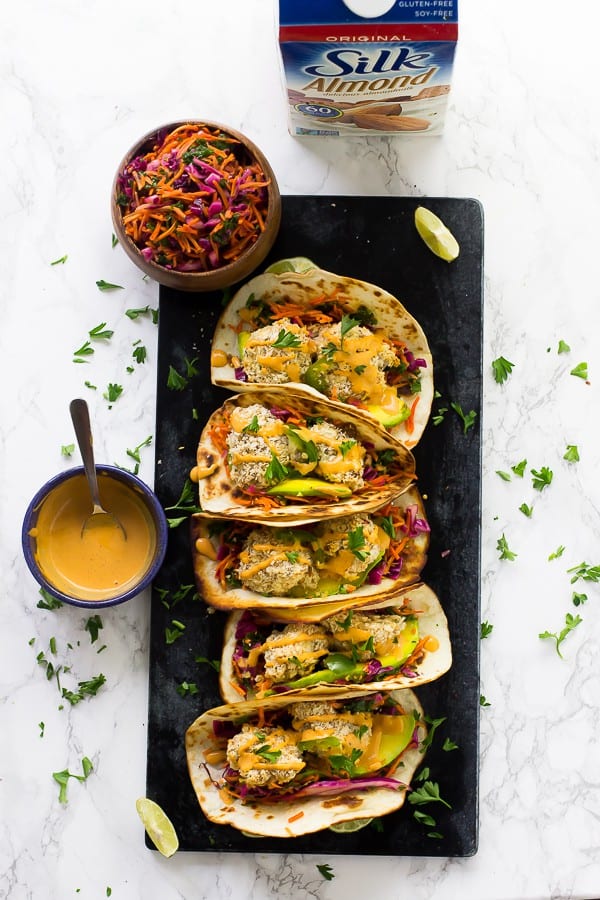 This is a sponsored conversation written by me on behalf of my favourite almond milk Silk! All opinions and text are 100% mine. 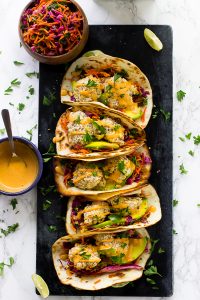 NOTES
This recipe is vegan. TO MAKE IT GLUTEN FREE  Use gluten free breadcrumbs and soft taco shells. You can make the kale cabbage slaw ahead of time, even before you put the crispy cauliflower tacos in to bake. Making it while it’s baking is just another option, although the flavours will marry together even better if made before. 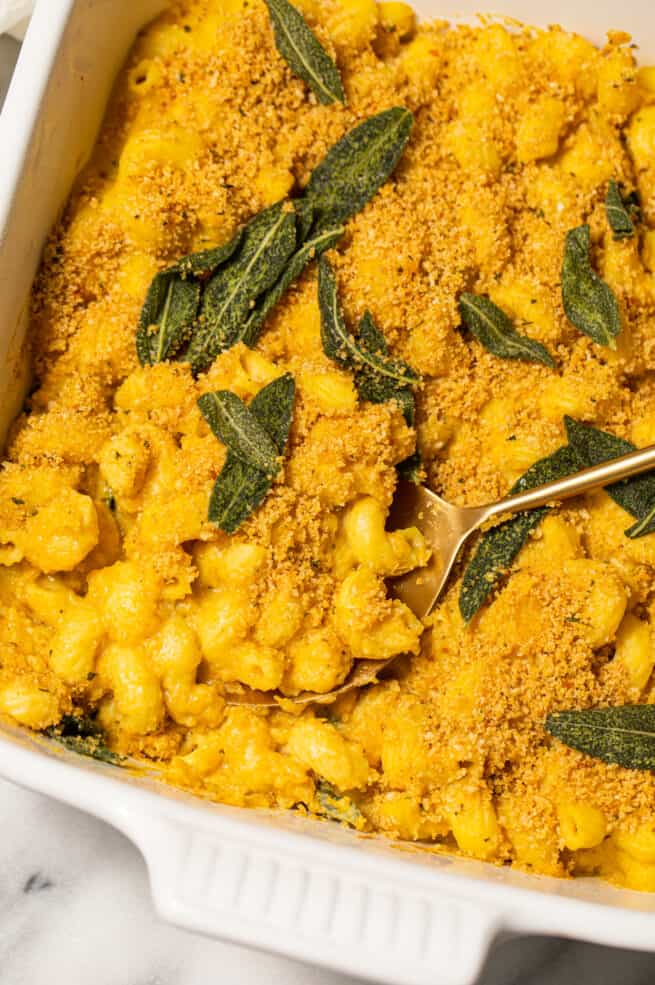 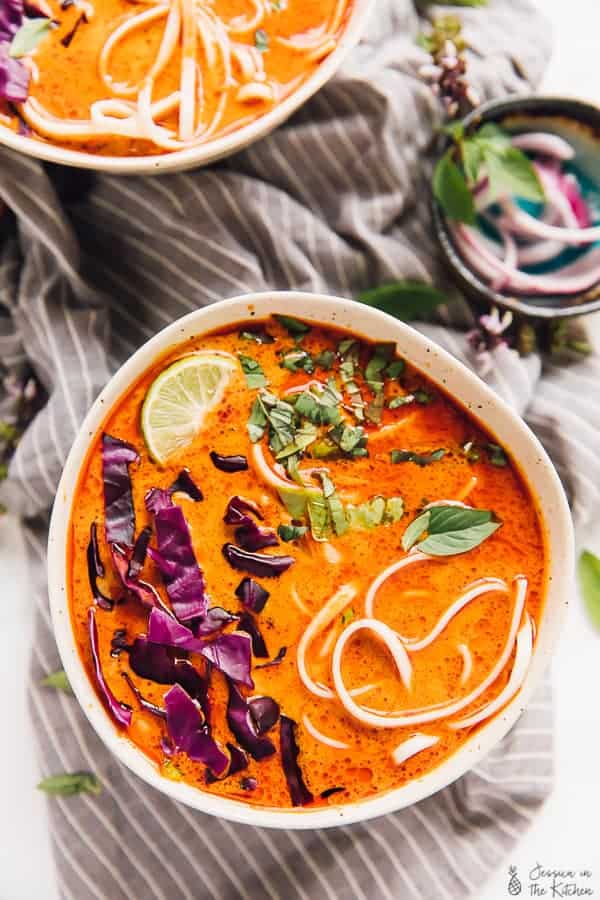 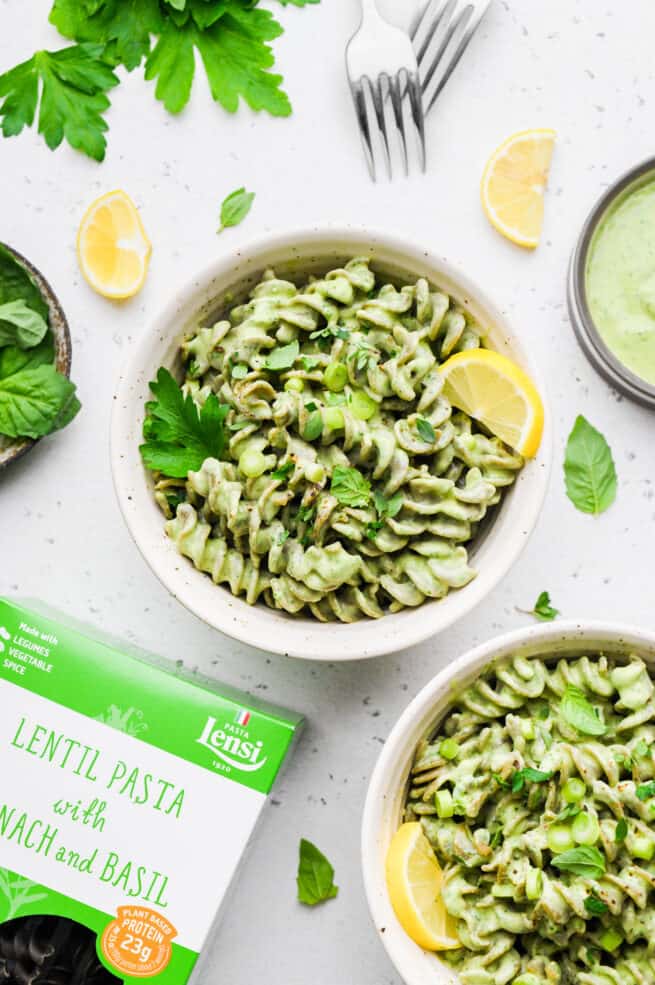