The sweet caramel-like, smooth flavour, moistness and surprise filling made these root beer float cupcakes the best ever! 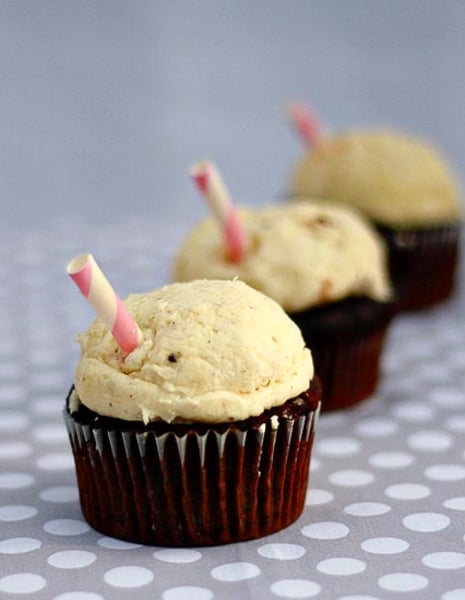 This was my first taste of root beer, and consequently root beer float cupcakes.

There! I said it! And what have I been missing all these years?! The sweet caramel-y, smooth flavour, moistness and surprise filling  that made these root beer float cupcakes the best ever. 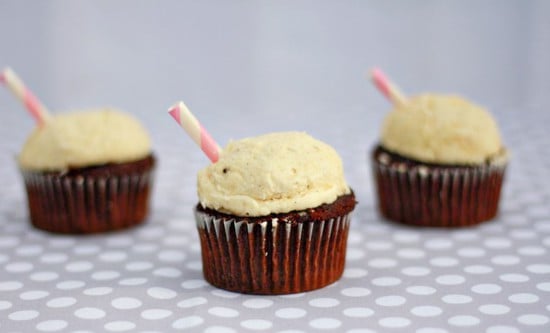 You heard me. I said best. ever. EVER. I love cupcakes, right. I love soft cupcakes. I die for moist cupcakes. And I go crazy for cupcakes with a surprise in the middle. 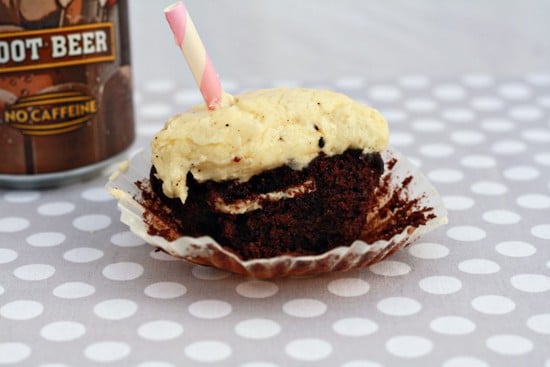 Hello? What did I just say? Everything that this cupcake is. I totally went on root beer overload. I used Jessica from How Sweet Eat’s Root Beer Float Cupcakes Recipe and went in. I added root beer into everything she didn’t have root beer in  and upped where she had root beer and I don’t regret it. When I say that the root beer made these cupcakes soft, I mean almost melt in your mouth soft, and definitely very delicate. But that doesn’t mean it wasn’t packed with flavour. The root beer flavour was something that’s hard to describe, but it’s slight caramel and slight fizz.

The chocolate taste. It’s definitely there. Yet, it’s subtle, meaning it’s not overpowering but this is a chocolate cupcake that chocolate haters would love.

And the FROSTING! Exactly like ice cream, no doubt. I know I went overkill on eating these but when else will you get ice cream flavoured frosting? Root beer flavoured ice cream?

Okay, come on you have to try them now! I girly-fied them as you can see (well, duh) but they’re perfect for guys too. 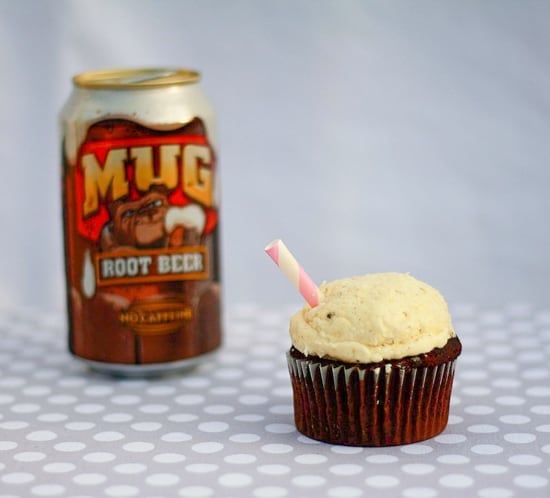 I did these cupcakes for Beer Month by NY Foodgasm and here are the other gals who posted today! 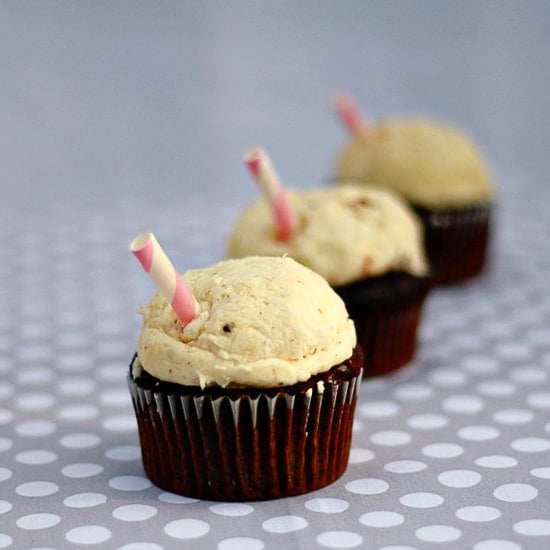 NOTES
I used an apple corer to get the middles of the cupcakes out. It’s so easy – then just push back down to cover back the holes once fillings are inside. 2. I used an ice cream scoop to scoop my frosting onto the cupcakes. 3. I also used a simple syrup over the cupcakes to keep them very moist – equal parts water and sugar boiled together then cooled, and added about 3 tablespoons of root beer. 4. These cupcakes last a very long time – I was impressed that days later they were still soft, moist and delicious. 5. Do NOT refrigerate these cupcakes. I made that mistake testing one and the frosting became rock hard and the cupcake dried out. While more simple syrup did help it, it’s best to store them in an airtight container. 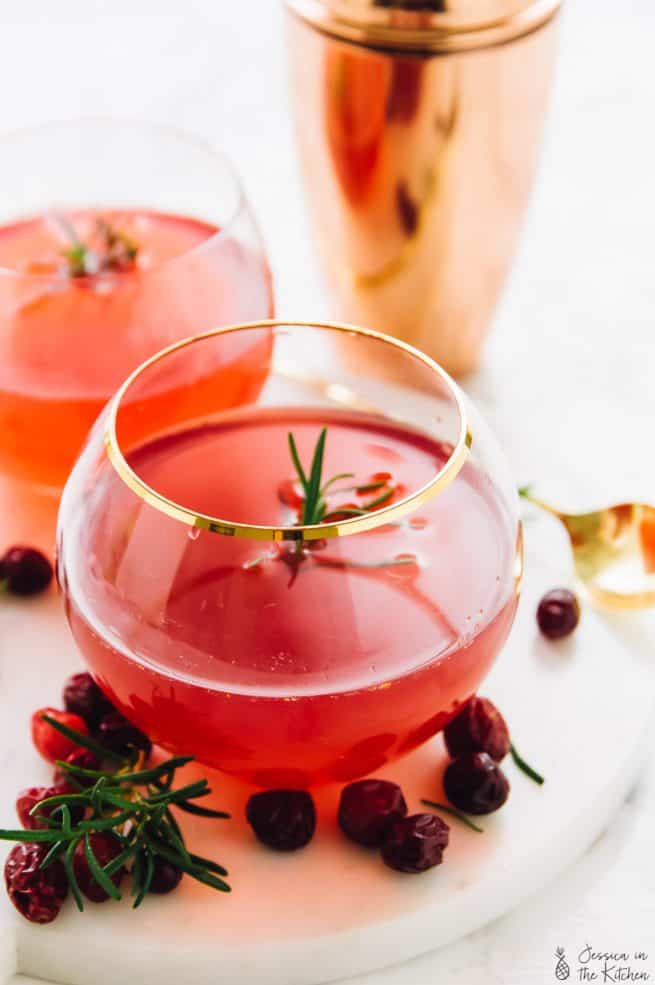 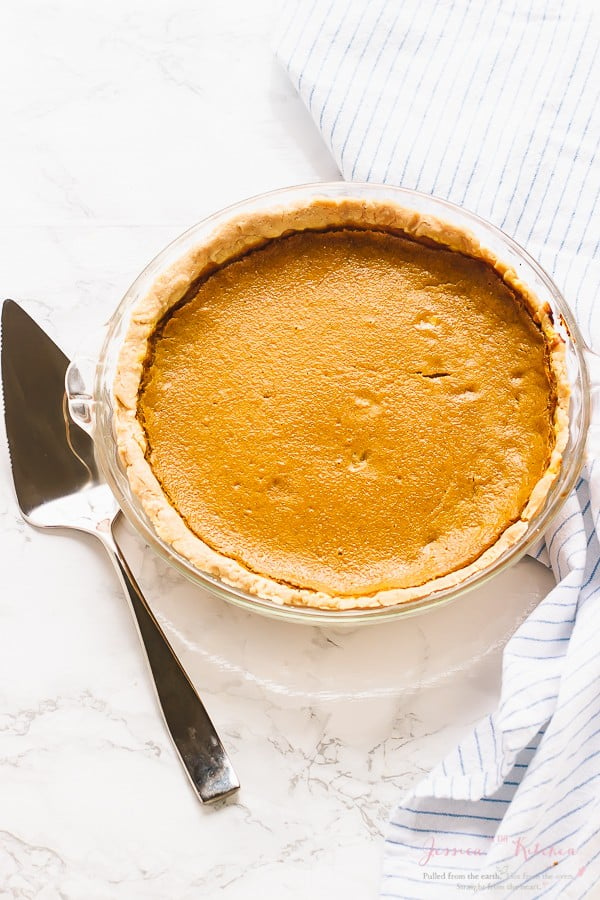